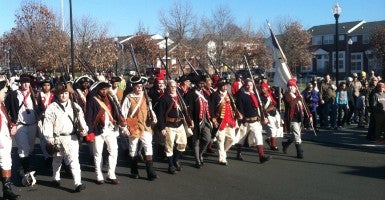 Re-enactors have a passion for portraying what really happened at the Battle of Trenton. (Photo: Kevin Mooney)

TRENTON, N.J.—We all know the story from high school history. Or think we do.

Gen. George Washington and his tired and tiny Continental Army scored one of the most significant battlefield victories in American history at Christmas in 1776.

The Continentals launched a surprise attack on the Hessians—mercenaries from Germany who were protecting Trenton, N.J., on behalf of the British.

The Hessians had more firepower, the story goes. But they left themselves vulnerable to the surprise attack because they got drunk celebrating the holiday and passed out.

Their no-account leader, Col. Johann Rall, died in the battle with a note in his shirt pocket from a local spy warning him of the impending attack.

The real story of what happened that Christmas is far more interesting and complex. It is retold every year during “Patriots Week”—a celebration of the great victory that includes a re-enactment of the battle, which draws thousands to the Pennsylvania and New Jersey sides of the Delaware River.

The Old Barracks Museum in Trenton is the center of the action during Patriots Week. There, one can ask colonial re-enactors what they know about Moses Doan, the loyalist spy opposed to the American Revolution who tried to warn Rall of Washington’s attack.

One can talk to the man who plays the role of Rall and learn of the difficult circumstances under which the head Hessian operated. And one can find out where the credit truly should go for the great victory that day. The Old Barracks Museum is on the site where two dozen Hessians were staying when the Battle of Trenton began. (Photo: Kevin Mooney)

First, for once Washington wasn’t outnumbered. Historical records show he crossed the Delaware with 2,400 Continental soldiers, including two dozen Philadelphia Light Horsemen and 18 cannons to confront just short of 1,600 Hessians armed with six cannons and under Rall’s command.

Washington split his forces between Gen. Nathaniel Greene, who marched up Pennington Road, and Gen. John Sullivan, who marched up River Road. Both columns hit Hessian outposts at around 8 a.m. Washington marched with Greene’s column and set up his cannons at the top of King Street (now Warren Street).

Almost 900 Hessians were taken prisoner, 83 were wounded and 22 were killed during the first Battle of Trenton. On the American side, two soldiers died from exposure and five others were wounded, including Lt. James Monroe, who would become the first wounded combat veteran to serve as president, and William Washington, the general’s cousin. Second, the Hessians weren’t drunk. They were tired from near-constant harassment by local militias.

John Godzieba, a resident of Langhorne, Pa., who portrayed Washington in the most recent re-enactment, says the Hunterdon County militia maintained constant pressure on the Hessian garrison “to the point where they had to sleep with their equipment on.” Godzieba, a police officer in Bristol Township, adds:

When they heard the first shots that morning after Christmas, they thought it was just another local militia, not Washington’s entire army coming down on them.

And about that note. Yes, Rall did have one in his pocket when he died that Dec. 26. He had received the note while playing cards at the home of Abraham Hunt, a Trenton merchant. How it got there is much discussed among re-enactors and historians.

Rall did not speak or write English, so if the note was not in German it wouldn’t have done him much good anyway. Also, it is the nature of espionage that such messages are not often in writing, so the questions of who wrote it and what it said continue.

Joseph Malit of Maple Wood, N.J., who portrayed the Hessian commander this year, says: “There was another attack on Christmas Day that was successfully repelled. So when Rall received the note he probably thought it was old news.”

According to one version of events, the spy Doan had learned of the plan in general—even most of Washington’s soldiers did not know specifics until the battle began—and crossed the river at Coryell’s Ferry (now New Hope, Pa.) with assistance from other loyalists. He then traveled on horseback to Trenton to warn Rall, but to no avail.

The warning would have been hard to believe anyway.

While Rall and his men were fighting off local militias, Washington had confiscated barge-like cable ferries used to transport horses, cannons and artillery from parts of Bristol and Easton, Pa., and taken them to McKonkey’s Ferry in Bucks County, Pa., where the crossing took place. Richard Patterson, executive director of the Old Barracks Museum, estimates it took about nine hours for Washington to complete the crossing because a severe snow and ice storm hit around 11 p.m.

The Continentals reached the New Jersey side around 3 a.m. and began the nine-mile march to Trenton about an hour later. They would arrive after daybreak. Not as early as Washington had hoped, but early enough.

The weather had worked to Washington’s advantage, says Patrick Jordan, a Philadelphia resident and re-enactor who played the role of Col. Paul Sergent, a Continental soldier from Massachusetts. Jordan says:

There was snow and there was sleet, and it was tough to get across. But this ultimately gave Washington cover because the Hessians did not expect this kind of an attack in such bad weather.

Rall does not deserve the reputation he has in history, Malit says.

“Rall was a very competent, very effective soldier,” Malit says. “He was not an aristocrat; he was a commoner who was very well-liked by his men. But he was put in a bad spot in Trenton. When he was shot, I think the fight went out of the Hessians.”

Painting Rall and his men as drunks does a disservice to what truly was a remarkable accomplishment by Washington, Malit says:

By moving multiple columns, Washington accomplished a great feat of military skill. This was not easy to do, and to say that the Hessians were drunk or unprepared denigrates this achievement.

The Making of America

Army Maj. Kevin McNamara, who is stationed at Fort Dix in New Jersey, was among the thousands who witnessed the re-enactment on Christmas Day.

“Without the Battles of Trenton we would not be the country we are today,” McNamara says. “Between Philadelphia and New York, Trenton gets overlooked—but it shouldn’t.”

Indeed, what began during Washington’s crossing culminated in the Battle of Princeton in what are now known as the 10 Crucial Days that turned the American Revolution.

After ferrying the Hessian prisoners back across the Delaware to Pennsylvania, Washington’s army returned to New Jersey to square off against the British during the Second Battle of Trenton on Jan. 2, 1777.

This one was fought along Assunpink Creek. At night, Washington slipped behind the troops led by Gen. Charles Cornwallis to attack the smaller British garrison in Princeton.

Washington was running out of time in his battle with the British, notes Jim Stinson, a Lawrence, N.J., resident who portrayed a Continental artillery commander during the Trenton battle re-enactments. Stinson says:

The enlistments for the Continental Army would be up in January. The attrition was immense, and the prospects looked gloomy. Washington could be a convincing speaker, but this was do or die. The choices in Trenton were capture, execution or victory. Getting More Out of History

That’s why locals such as T.C. Nelson, owner of Trenton Social on South Broad Street, say Trenton should do more to promote its rich heritage. The city, they say, should market itself as one of the most significant battlefields in U.S. history—because it is.

“Look at how Williamsburg and Gettysburg leverage their history,” Nelson says, adding:

We should be doing that here in Trenton. This could have been the capital of the U.S., and in fact Trenton was the capital for a brief period of the time.

Indeed, the historical significance of Trenton and the holiday season of 1776-77 can surprise Americans.

“When I came to this area I did research on every part of New Jersey, and there was history every place I looked,” says Stephanee Brown, 22, a graduate of the College of New Jersey who has been crowned Miss Trenton the past two years.

“It is hard to overstate how transformative the events were that took place here during the Revolution. Without Trenton, there would not be a United States.”

And, as the folks around the Old Barracks Museum will tell you, if Rall—buried outside First Presbyterian Church on East State Street along with other Hessian soldiers—had understood the significance of that note in his pocket, Americans might be carrying British passports to this day.