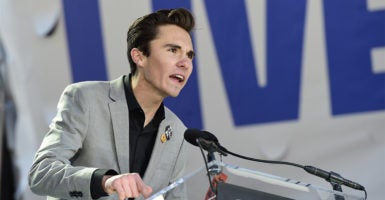 David Hogg, a survivor of the massacre at Marjory Stoneman Douglas High School in Parkland, Florida, addresses the March for Our Lives rally on March 24, 2018, in Washington, D.C. (Photo: David Tulis /UPI/Newscom)

This week, the allegedly unbiased fact-checkers at PolitiFact awarded their “Lie of the Year” award to the “online smear machine” that attempted “to take down” the survivors of the shooting at Marjory Stoneman Douglas High School in Parkland, Florida.

“The attacks against Parkland’s students stand out because of their sheer vitriol,” the piece explains. “Together, the lies against the Parkland students in the wake of unspeakable tragedy were the most significant falsehoods of 2018.”

It should go without saying that those who spread the conspiracy theory that the activists in the wake of the horrific school shooting were “crisis actors”—kids only pretending to be victims—are exceptionally terrible people.

It’s debatable, though, whether this conspiracy theory, which had no effect on policy or the students’ ability to march or speak out, should be considered the most significant political lie in 2018. I’m relatively positive that the vast majority of Americans have never heard it.

It’s debatable, in fact, that it was even the most significant lie disseminated about the mass shooting at Stoneman Douglas High. After all, at a widely covered CNN anti-gun rally, the sheriff of Broward County misled the nation about the failures, cowardice, and incompetence that allowed the shooting to occur. And the sheriff of Broward County isn’t some random Twitter troll.

The internet, particularly social media, has made conspiracy theories seem more pervasive and immediate. Conventional wisdom tells us that fake news is a serious and growing problem in American life. I’m skeptical that the trend is unique to our age.

Whatever the case, it’s become a misleading tactic of some journalists to collect random tweets of crazy people or anonymous attention-seekers and use them as a digital straw man. This hyper-focus on fringe players is a way to create the impression that one side of the debate continues to stubbornly embrace “the truth” while the other is infested with slack-jawed yokels who’ll believe just about anything.

PolitiFact is just employing a larger-scale version of this maneuver.

Although I know of numerous Twitter accounts that have accused gun rights advocates of being terrorists—many of them featuring blue check marks—I can’t recall a single conservative in Congress, anyone in the National Rifle Association, or anyone in any other mainstream right-wing group accusing the Parkland kids of being crisis actors.

I do recall an article on RedState questioning David Hogg’s actions the day of the mass shooting, but that was quickly corrected and apologized for.

Yet PolitiFact spends much of its time detailing the Parkland kids’ cause by highlighting their political opponents who have nothing to do with the smear, implicitly linking them to the “Lie of the Year.” The piece is framed in a way that insinuates that anyone contesting the Parkland kids’ political cause is now in league with the online mob—and Russian bots!

By the way, even if we allow that kids who have experienced this type of tragedy should dictate the contours of a policy debate, it is worth noting that there are “Parkland kids” who hold diverging opinions regarding the Second Amendment and arming teachers. They are largely ignored by the media.

It’s not the kids’ fault that they find themselves the focus of ugliness on social media. It’s the fault of those who attack them and the fault of the adults who exploit them for political causes. Young people should be given some leeway in their activism, even if they say ridiculous things—and Hogg and other leaders of the March for Our Lives movement often say things that aren’t even in the proximity of the truth. There is no need for ad hominem attacks.

But the “Parkland kids” were also given a massive stage on which to offer their uncontested emotionalism to drive the debate. Even though they’re kids, Americans have every right to challenge their contentions.

The “online smear machine” is an amorphous and ugly entity that isn’t confined to any ideology and spares virtually no one in the public eye. But any way you look at it, imbuing it with an importance it doesn’t deserve isn’t doing public discourse any favors—even if it makes conservatives look bad.