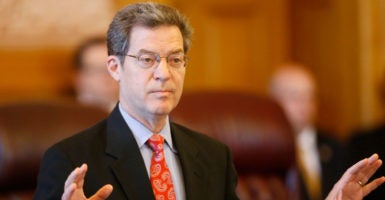 “It was gratifying to see an administration go to bat for somebody that was innocent,” Sam Brownback, the U.S. global ambassador for religious freedom, says of the president’s work to free an American pastor in Turkey. Pictured: As governor, Brownback addresses Republican state lawmakers in Topeka, Kansas, on June 11, 2015. (Photo: Bo Rader/TNS/Newscom)

President Donald Trump is committed to pushing for greater tolerance of different faiths by governments around the world and dismantling an “iron curtain of religious persecution,” his envoy for religious freedom said in an interview with The Daily SIgnal.

“Most people in the world move by what their faith tells them,” Sam Brownback, the former Kansas governor who is Trump’s international ambassador-at-large for religious freedom, said in the interview.

“Much of the world—we’re looking at numbers now—nearly 80 percent live in a religiously restrictive atmosphere, so they don’t have freedom of religion,” he said.

But in the United States, Brownback said, “religious freedom is a foundational right, it’s a God-given right,” and “governments don’t have the right to interfere with it.”

“So we’re going to push on it,” he said. “And the reason it’s so important is it impacts so many people, and so few countries are willing to really stand up and push for it.”

Trump nominated the Kansas Republican for the job in July 2017, while he was in his second term as governor after a stint in the Senate from 1996 to 2011. He resigned as governor and assumed the ambassadorship Feb. 1.

Brownback grew up a Methodist, converted to Catholicism in 2002, and as of last year attended a nondenominational evangelical church in Topeka, Kansas, according to an article by the Religion News Service.

Brownback, 62, called the current state of international religious freedom “not good” for citizens of countries such as Iran who live in “restrictive atmospheres.”

“Unfortunately, I think the religious restrictions have been growing over the last 20 years,” he told The Daily Signal in the Nov. 30 interview. “There are places where it’s quite good. But the trend line has been against religious freedom.”

“Yet,” Brownback added, “I think [the administration can make progress] with the United States really leaning in on this, pushing on this, and then showing to countries, ‘If you want to grow, one of the key things you can do is provide religious freedom.’”

Iran’s Islamist regime is a sobering example of what people face in countries that actively restrict religious liberty, he said.

“In Iran, you get caught, you’re going to jail, or you can get a hand cut off, or you’ll be killed for practicing a faith that’s different than the dominant Shia religion there.”

Brownback said Trump has made international religious freedom a focus of his administration. He said the inaugural Ministerial to Advance Religious Freedom, a conference hosted by Secretary of State Mike Pompeo, showcased the president’s commitment.

A total of 84 countries participated in the meeting, held July 24-26 in Washington, and the gathering included 1,000 representatives of civil society and religious groups, he said.

“I think what we found, because we did this on such short notice, is that we’ve hit a vein. This is something that touches a lot of people, and it touches them very deeply,” Brownback said, emphasizing that governments around the world not only have fallen short in providing their citizens with religious freedom, but also have taken steps to prevent it.

“Governments have been messing in this space in an increasing role for the last three decades,” he said. “It needs to stop.”

Brownback said organizers plan to hold a second international gathering next year and to set up regional meetings on specific topics in other countries.

“There are a number of countries who are stepping up to do this,” he said. “And my hope is, really, we can bring this iron curtain of religious persecution down. The same way as the Iron Curtain of communism came down, so you can get that burst of freedom as the world wakes up.”

Brownback said the release in October of Andrew Brunson, an American pastor held for two years in Turkey on terror and treason charges, showcases Trump’s commitment to religious freedom.

Trump’s work for Brunson’s release was remarkable, he said, including tariffs on aluminum and steel from Turkey that “tanked” that country’s currency.

“It was gratifying to see an administration go to bat for somebody that was innocent, in spite of all the other equities and all the other relationship issues we have with Turkey,” Brownback said. “They said, ‘This guy is an American citizen being wrongly treated, and we’re going to go to bat for him,’ and they did. I was delighted to see him get on out.”

Brownback said his role as international ambassador-at-large for religious freedom has given him the opportunity to hear many stories of people like Brunson who are faithful even in adversity.

“You can elevate the topics, and that’s been very gratifying, but the most gratifying thing is when you talk with people that you help get out of jail,” he said, adding:

The beauty of their soul that’s gone through such persecution just really grows my faith, because I look at that and I’m just so impressed with the peace and the joy that they have. You can’t counterfeit it. You can’t act this way. It has to be a real thing that flows out of you. And I get to meet people and work with people like that every day.