Students Want to Remove the Name of Clarence Thomas From Building, but Can’t Say Why 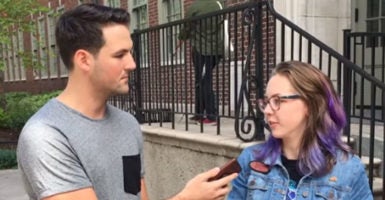 Supreme Court Justice Clarence Thomas grew up poor near Savannah, Georgia, where some students advocate removing his name from a building at the Savannah College of Art and Design. (Photo: Campus Reform)

Some students at a Georgia college continue to call for removing Supreme Court Justice Clarence Thomas’ name from a campus building, but aren’t able to say why.

“We should probably just take his name off of the building,” a young woman tells Cabot Phillips, Campus Reform’s media director, in a video posted Monday by the conservative student organization.

The subject of the video is the Clarence Thomas Center for Historic Preservation on the campus of  the Savannah College of Art and Design.

Sage Lucero, an alumna of the school who created a petition on Change.org titled “Take A Sexual Predator’s Name Off of SCAD’s Building,” canceled the petition in late October, as The Daily Signal previously reported.

During Thomas’ 1991 Supreme Court confirmation hearings, Anita Hill, whom Thomas supervised at the Education Department and at the Equal Employment Opportunity Commission, made international news with accusations that he had made unwelcome sexual advances toward her.

The three-story brick building at the Savannah College of Art and Design, erected in 1908, formerly served as an orphanage and convent for the Missionary Sisters of the Franciscan order.

In the video, when Phillips asks students what they would point to that would justify their signing the petition to remove Thomas’ name, at least eight don’t have an answer.

“Um, um, hmm, do you mind if I get back to you?” a student wearing a pink bandana says.

“I don’t know, I haven’t done much research on this,” a young woman tells Phillips. “I just saw a Facebook petition about it, and that’s kind of the extent of it.”

Thomas grew up poor near Savannah.

“He is a historical figure,” says a student in the video wearing a Saints hat. “So, uh … So is Hitler.”

When Phillips asks whether Thomas had done something to justify removing his name, the student replies: “Not in particular.”

The video, however, does show a few students who support keeping the building named after Thomas.