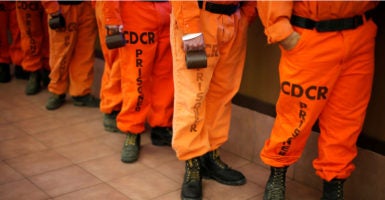 Mississippi implemented its second round of criminal justice reforms this year after touting the successes of a previous package in 2014.

The first installment focused on sentencing, addiction and mental health treatment, and job skills for when inmates leave prison. State officials point to lower crime, fewer inmates, and savings for taxpayers as signs of success.

The new law, which Mississippi Gov. Phil Bryant signed in May, focuses on re-entry to society and cutting recidivism. President Donald Trump, visiting the state last month, praised the reforms.

In 2012, Mississippi had the second-highest incarceration rate in the United States, behind only Louisiana. The rate had surged 300 percent from 1983 to 2013.

Of those released after serving their sentences, 1 in 3 nonviolent offenders returned to prison. As a result, in 2013 the state assembled a Corrections and Criminal Justice Task Force that produced a framework for House Bill 585.

“Criminal justice reform is the No. 1 issue of our time,” state Rep. Joel Bomgar, a Republican representing the Madison area, told The Daily Signal.

Bomgar was a co-sponsor of House Bill 387, the Re-entry and Affordability Reforms Act. The bipartisan legislation, which went into effect in July, follows the state’s sweeping 2014 sentencing reforms.

Under the new reform, judges must determine a person’s ability to pay a fine before sending him or her to jail. And if the person’s income is at or below 125 percent of the federal poverty line, a court must grant him time to pay or allow community service in place of a fine.

The idea is that no one can earn enough money to pay a fine if he is locked up, Bomgar said.

The new law outlaws “debtors’ prison,” or incarceration for inability to pay legal and court fees. Bomgar said the focus is on making sure inmates who return to society are employable.

“It’s an economic benefit and the more people who are working, the fewer people who are in prison,” he said. “If someone isn’t employable, it’s more difficult to live a lifestyle to stay out of prison.”

Trump held a roundtable discussion on criminal justice reform Nov. 26 in Tupelo, Mississippi, since he is promoting national legislation now before Congress.

The president hopes the current Congress will pass the bipartisan bill during the lame-duck session before the Christmas break, after which the new Congress—with a Democrat majority in the House—will convene.

The bill would allow inmates convicted of nonviolent crimes, if they complete certain education and training programs, to earn credits toward spending more of their sentences in supervision outside prison, in a halfway house or home confinement. The hope is that they would get a job and more easily transition back into society.

Trump praised those in Mississippi “who have worked so hard on legislation, and this legislation in particular.”

The president laid out the goal: “Enact reasonable sentencing reforms to ensure fairness while keeping dangerous criminals off the street—so important—and revitalize our criminal justice system to be tough on crime, but also smart on crime.”

Pelicia E. Hall, commissioner of the Mississippi Department of Corrections, said at the roundtable that the state is focused on re-entry, including vocational training for inmates being released, such as learning to get a manufacturing job or gain a commercial driver’s license.

Besides Trump, Bryant, and Hall, those attending the roundtable event included Vice President Mike Pence, the president’s son-in-law and White House adviser Jared Kushner, and Miss Mississippi Asya Branch, wearing a gown and crown. Branch has made criminal justice reform one of her causes.

“Criminal justice reform is an ongoing issue,” the state lawmaker said. “We still have a long way to go. I don’t think there is any state that is yet past the 50-yard line.”

The American Civil Liberties Union of Mississippi has noted that the state still ranks third in overall incarceration. The ACLU also asserted that black males make up almost two-thirds of those incarcerated, but only one-third of the state’s population.

Various states are tackling the matter differently, said John-Michael Seibler, a legal fellow in the Edwin Meese III Center for Legal and Judicial Studies at The Heritage Foundation.

“There are all kinds of bills at the state level. Some states will do omnibus bills to get everything in one package,” Seibler told The Daily Signal. “Other states do one or two initiatives at a time. Other states do a few things one year and then a few years later take another bite of the apple, like Mississippi.”

States have set the tone for the national discussion, he said.

“We could look at a few states to call national examples. There were successful reforms in Texas and Georgia and other states,” Seibler said. “Mississippi has done things on the sentencing side that are the kinds of things Congress could do.”

The latest rounds of reforms in Mississippi, under HB 387, also make it easier for former inmates to keep their jobs if they can get them, said John Koufos, national director for re-entry initiatives for Right on Crime, a conservative prison reform advocacy group.

“If you’re lucky enough to get a job, but have to leave the job to meet with a parole officer, it will make it tougher to keep the job. This bill allows parole checks to be done by Skype,” Koufos told The Daily Signal.

A Governor Who Gets It

Under the new reforms, instead of incarceration for failure to pay a court fine, a hearing is held to determine the former inmate’s ability to pay. If the person is not able to pay the full fine, a gradual payment system is worked out.

“Who is protected? People on parole ordered to pay restitution to victims’ family will be more likely to do so,” Koufos said. “Also, more people will pay child support. Mississippi would spend more incarcerating the person who owes $300 or $400 before they even get their first meal. That math doesn’t add up, and it’s not going to scare anyone into paying because you can’t get blood from a stone.”

Koufos said Bryant’s experience in law enforcement has given the Republican governor strength on this issue.

“Gov. Bryant gets it from his time in law enforcement,” Koufos said. “Mississippi is a great model and Gov. Bryant is a great leader in taking the bull by the horns in restoring public safety.”

During a previous roundtable on criminal justice reform last August at the Trump National Golf Club in Bedminster, New Jersey, Bryant spoke about the successes in his state following passage of the 2014 law.

“We used all the things that Georgia has been successful with, and Texas. I called both of these governors and said, ‘Tell me how you did it,’” Bryant said at the New Jersey event.

He said that bringing in faith-based communities has been a major help.

“It takes a change of heart,” Bryant said at the New Jersey forum. “I’ve been around a lot of people who are in jail, and if their hearts aren’t changed, their lives will not be changed. So prison ministries—all of those things that government doesn’t like to admit to that works—works.”