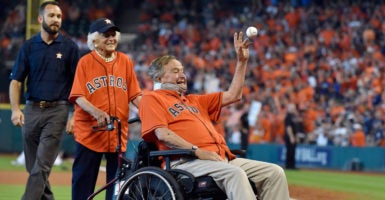 With former first lady Barbara Bush behind him, former President George H.W. Bush throws the ceremonial first pitch before a baseball game between the Houston Astros and the Kansas City Royals on Oct. 11, 2015, at Minute Maid Park in Houston. (Photo: John Sleezer/TNS/Newscom)

Did you know George and Barbara Bush attended the Houston rodeo? Houston native Ginny Montalbano talks to her dad, who was also involved in the rodeo, about the times the Bushes participated—as well as their impact on the community. Plus: A Michigan lawmaker is promoting a resolution urging fast-food chains to stop classifying kids meals toys as for boys or for girls.

My sisters & I met President Bush once at the Houston Rodeo as he started the calf scramble alongside my dad. My sister had on matching silver sequined black shirts. He was so tickled by them. Will never forget the standing ovations he & Mrs. Bush received every year they came. pic.twitter.com/OHBISC9LZt