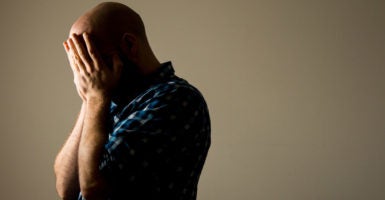 As of 2016, an estimated 10.4 million adults suffer from a serious mental illness in the United States. (Photo: Dominic Lipinski/ZUMA Press/Newscom)

Mental illness is a very real problem that affects many aspects of our society.

In the United States, as of 2016, an estimated 10.4 million adults suffer from a serious mental illness, such as bipolar disorder or schizophrenia, for which there is no cure.

One of the most complex societal aspects affected by mental illness is criminal justice.

Some individuals with mental illnesses have a propensity to commit crimes because they have delusions and distorted perceptions of reality, live on the streets, or have drug and/or alcohol addictions.

While these individuals should not be excused for committing a crime, they should be afforded an opportunity to have a better life by receiving treatment, rather than going in and out of jail or prison with no hope for the future.

By giving these individuals a chance, we make our society a better and safer place—and that’s true for all criminals, not just those with serious mental illnesses.

I recently had the opportunity to observe how the D.C. Superior Court is giving mentally ill criminal defendants a chance to change their lives.

The experience was enlightening.

Specifically, I observed and toured the D.C. Superior Mental Health Community Court, which was established in 2007.

The court is a voluntary treatment court focused on criminal defendant rehabilitation and treatment, as opposed to retribution.

The court’s case-management plan provides criminal defendants who are diagnosed with a serious mental illness an opportunity to have their criminal charges reduced, convictions removed, or sentences shortened so long as they participate in treatment programs for their mental illnesses and any substance abuse problems.

As of October 2017, “the court has provided services to more than 3,500 defendants facing misdemeanor charges and has certified 452 defendants facing felony charges to the program,” according to Cleonia Terry, the court’s coordinator.

An important feature of the court is that not all criminal defendants are eligible for the program.

Only defendants with limited criminal histories who are charged with misdemeanors and nonviolent felonies are eligible to have their cases moved to the court.

Additionally, only individuals diagnosed by the D.C. Pretrial Services Agency with a serious and persistent mental illness are eligible for it.

During my time in the courtroom, I observed the full gamut of its cases.

One defendant agreed to have his felony drug offense reduced to a misdemeanor in exchange for continued participation in mental health and substance abuse treatment programs.

During his hearing, that defendant remarked how appreciative he was for the opportunity to turn his life around.

Two other individuals graduated from the court’s program the day I was there, and had their cases dismissed, after they successfully completed their treatment programs in satisfaction of the terms of the agreements they entered into with the prosecutor and the court.

The excitement on their faces was evident as the court handed them a certificate of achievement and other tokens to help them remember all they had accomplished.

The graduation ceremonies concluded when the individuals signed their name on a label, which was then placed alongside the names of others who have graduated from the program.

Unfortunately, I also observed defendants who were struggling to make progress.

One defendant admitted he was battling a drug addiction and having family problems, which were preventing him from advancing to the next step in the process.

Another defendant had recently tested positive for alcohol use, which meant she was not eligible at the time to move forward with resolving her charges.

To my surprise, a defendant even came before the court and asked the court to transfer his case back to the D.C. Superior Court’s criminal docket because he was not willing to move forward with treatment.

Certainly, these individuals are going through more difficult times in their lives than the other defendants who were making progress in the specialty court.

But for any of these individuals, I imagine that those times would be much more difficult if they were not given at least a chance to seek treatment.

And that was a lesson learned from sitting in the courtroom.

Regardless of whether the individuals were struggling to begin treatment, just starting treatment, or completing treatment, I wondered how different their lives might be if they were not in that court.

I surely do not think they would be better, and neither would society, if they were sitting in jail, getting little or no help at all.

For some, maybe that is the case, but for others, that’s an unlikely scenario.

Most of the men and women in the court that day were taking positive steps to improve their situations and their mental health problems, and they should be rewarded for it.

The Mental Health Community Court is giving them that opportunity, and by doing so, making Washington, D.C., a better and safer place.