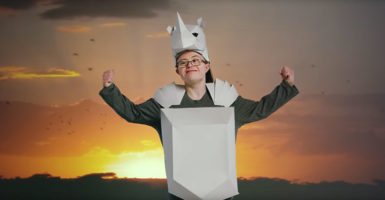 A group of children with Down syndrome are the first humans ever to apply to be on the International Union for Conservation of Nature’s endangered list. (Photo: Canadian Down Syndrome Society)

Get ready to watch one of the most heart-wrenching pro-life ad campaigns you’ve ever seen.

It’s called “Endangered Syndrome,” and in it, children with Down syndrome dress up as endangered species—pandas, polar bears, and lions.

In the U.S., at least 67 percent of babies diagnosed with Down syndrome are aborted. In the U.K., that number is closer to 90 percent. In Denmark, it’s 98 percent.

In 2017, CBS News infamously broadcasted a news report asking: “Is Iceland on track to eliminate Down syndrome?” The problem was, Iceland wasn’t eliminating Down syndrome; it was eliminating anyone who has it.

The Endangered Syndrome ad campaign, created by the Canadian Down Syndrome Society and highlighted by LifeSite News, adds context to the conversation surrounding the sharp decline in babies being born with Down syndrome worldwide.

In addition to producing a compelling 60-second video, the Canadian Down Syndrome Society is applying for people with Down syndrome to be the first-ever humans included on the International Union for Conservation of Nature’s Red List of Threatened Species.

“This letter is our formal application for the inclusion of people with Down syndrome as an endangered sub-species or sub-population of Homo Sapiens to the [International Union for Conservation of Nature’s] Red List of Threatened Species,” the society wrote, adding, “The existing Down syndrome community is shrinking and with the diminishing population, comes a correlated decrease in access to services such as education, housing, employment, as well as their overall quality of living.”

Abortion is a difficult subject, as are the many reasons women seek it. But that doesn’t mean we should sugarcoat the conversation and pretend extinction isn’t happening.

Women and their partners are choosing to abort babies with Down syndrome at alarming rates, and we, as a society, have a moral obligation to discuss whether or not that’s OK.

“We need support. Like all these animals do,” say the children featured in the Endangered Syndrome video. “They make the world a more beautiful place. And so do we.”

The visual of children with Down syndrome dressed up as endangered species is an inconvenient image of abortion, probably because the parallel rings so true.