This 1 Item in the Opioid Bill Will Cause Problems 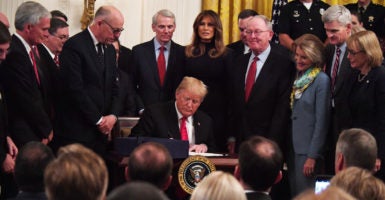 SUPPORT is an acronym for “Substance Use-Disorder Prevention that Promotes Opioid Recovery and Treatment.”

The new law will create new opioid treatment programs, provide better access to addiction treatment, and strengthen the oversight of prescription opioids—all of which will go a long way in the country’s fight against the opioid epidemic.

But the law also does something else—something not so good, despite being well-intentioned.

The SUPPORT Act creates a new federal criminal law on health care fraud, although the conduct it criminalizes is already illegal under both federal and state law.

That duplication can be a serious problem for a number of reasons:

At the same time, the Eliminating Kickbacks in Recovery Act of 2018, part of the SUPPORT Act, makes it a federal crime for sober homes—residential facilities that treat people suffering from drug dependence—to provide certain monetary kickbacks (or non-monetary benefits) to individuals or organizations who refer patients to those facilities for treatment.

The bill also makes it illegal for individuals—including sober-home patients—to receive or solicit a kickback from a sober-home facility.

Those convicted of violating the law are subject to a maximum penalty of a $200,000 fine or 10 years in prison, or both, for each violation.

Their House counterparts, Reps. Steve Knight, R-Calif., and Anna Eshoo, D-Calif., introduced an identical bill in the House on Sept. 26.

But the stand-alone bills were never brought to a vote in either the Senate or the House.

Instead, the bill’s language was snuck into the final version of the SUPPORT Act at the last minute—and was never vetted through the normal legislative process.

That’s remarkable, but not surprising.

Congress is infamous for trying to fix every problem in our society with new but unnecessary criminal laws, as states typically have already enacted their own laws to try to fix those very same problems.

And that, over many years, has given rise to the over-federalization of crime—a byproduct of over-criminalization, which is a neologism for the government’s use of the criminal law to punish conduct that is not traditionally thought of as morally blameworthy.

Health care fraud is rampant in the addiction treatment industry and it is often perpetrated through a practice known as “patient brokering.”

Sober homes need patients to keep their doors open, so these facilities will often employ third parties, including their own patients, to recruit and refer patients to the sober homes for addiction treatment.

In essence, these third parties broker patients in exchange for a reward—i.e., a monetary kickback or other benefit.

Not all such kickback schemes are illegal, however.

It is only when the kickbacks are funded with fraudulent health care reimbursements that they become illegal—and that was true before the Eliminating Kickbacks in Recovery Act became law.

These illegal kickback schemes typically begin with a broker who recruits a patient for treatment in a sober home.

Once there, the sober home will induce the patient to undergo unnecessary, ineffective, and in some instances, fake treatments, like taking 20 drug tests a week when one or two a week might be sufficient.

But these sober homes have neither a real interest in treating patients, nor are they concerned with how much treatment costs, since they do not foot the bill.

Instead, they are reimbursed by the patient’s private or public health insurance provider—a process that, sadly, some have used as an opportunity to get (illegally) rich, rather than to help those in need.

To pad their own pockets and as well as those of their brokers, sober-home operators will inflate (or simply make up) the costs of treatment when they file for reimbursement with the patient’s health insurance provider.

That allows the operators to cover the treatment costs, pay out kickbacks to patient brokers, and keep the leftovers.

Then the process repeats. It is a vicious cycle of fraud.

There is no doubt that patient-brokering and the health care fraud that follows are serious problems. But the Eliminating Kickbacks in Recovery Act will do little to solve them.

The law’s proponents argued that patient-brokering kickback schemes were legal under federal law—prior to the measure  becoming law—if those schemes were funded by private health care reimbursements.

Such schemes were supposedly only illegal if they were funded by public health care reimbursements. But that isn’t true.

The two primary suspects were charged with conspiracy to violate the federal health care law for running an illegal patient-brokering scheme that the two men funded by defrauding patients’ private health care plans.

The federal health care fraud law (18 U.S.C. § 1347) makes it illegal to knowingly and willfully defraud or attempt to defraud “any health care benefit program,” which is defined as “any public or private plan or contract, affecting commerce, under which any medical benefit, item, or service is provided to any individual … .”

As I recently explained in a Heritage Foundation report, a number of states are cracking down on patient-brokering and have brought charges against individuals who were using the schemes to defraud state health insurance providers, both private and public.

So, why did the Eliminating Kickbacks in Recovery Act become law?

The answer is simple. Heritage scholars have answered this question before (see here and here).

Politicians like creating new criminal law because it “is an especially easy way for [them] to drum up political support [as] it gives the public a sense that ‘something is being done’ about crime.”

Here, something was already being done about crime, but Congress felt the need to create yet another criminal law.

The over-federalization of crime continues apace.