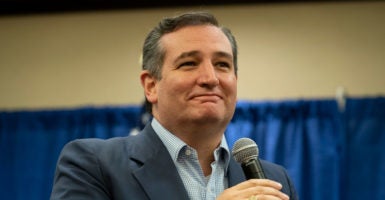 If you were looking for a dramatic Senate contest, Cruz vs. O’Rourke in Texas covered all the bases.

It began as a fairly tepid race, with incumbent Sen. Ted Cruz, R-Texas, largely ignoring challenger Rep. Robert “Beto” O’Rourke for months. It turned into a hotly contested, nationally watched race once the GOP realized O’Rourke was resonating with, and exciting, voters in the Lone Star State.

Reminiscent of the celebrity infatuation in 2008 with another Democrat, then-Sen. Barack Obama of Illinois, black-and-white “Beto” signs and shirts showed up not only in Texas, but across the country.

But even in the face of the media fawning over O’Rourke, an 11th-hour endorsement from singer Beyonce, O’Rourke’s $30 million fundraising edge, and high voter turnout in liberal jurisdictions such as Harris County, Cruz pulled off a victory by 50.9 percent to 48.3 percent of the vote.

O’Rourke has Irish roots, Cruz has Cuban roots. Despite Cruz’s being Hispanic, though, a favored identity group in the view of liberals, the left is insulting “white women” for voting for the sitting senator.

According to NBC News, 59 percent of white women voted for Cruz and not for O’Rourke, a fact that left many liberals unhappy.

White women… we need to talk.

I’m speaking to the “feminists” too. You all need to start holding yourselves accountable in your feminism. Because this is inexplicable. pic.twitter.com/uxWWtve0lJ

I know we talk endlessly about white women but WTF is wrong with Black men? 16 percent voted for ted Cruz and 13 percent voted for trump in 2016. That’s too high a number for y’all not to get side eyed too ?????? https://t.co/rTW4g8CXjB

They just hung on by their fingernails. WHY did 59% of WHITE WOMEN vote for #TedCruz?? Women HAVE TO VOTE their interests, not follow their husbands! https://t.co/u5mOiJtntY

Ted Cruz couldn’t be whiter if that cow were made of mayonnaise pic.twitter.com/D8iM4fjGIH

White people re-elected Ted Cruz. If there’s a better argument for the abolition of whiteness, I haven’t beard it.

It’s something of a trend among many on the left not to accept women’s choices when those choices do not align with liberal policies or candidates.

Groups such the Women’s March and Time’s Up claim to support all women, but when they encounter women who think differently from themselves, their attitudes quickly change.

That prompted a response from The Daily Wire’s editor-in-chief, Ben Shapiro.

Despite the sentiments on Twitter voiced by the left, Cruz reaffirmed his commitment to all Texans in a conciliatory victory speech Tuesday night, saying:

Millions across this state were inspired by [O’Rourke’s] campaign.

They didn’t prevail, and I am grateful the people of Texas chose a different path. But let me say to all of those who worked on his campaign, all of those who were inspired, that I am your senator as well. My responsibility is to represent every Texan.