Birthright Citizenship: A Fundamental Misunderstanding of the 14th Amendment 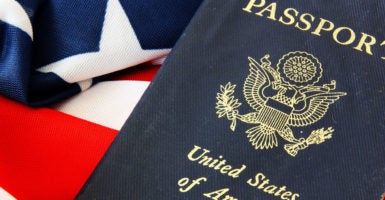 What’s the citizenship status of the children of illegal aliens? That question has spurred quite a debate over the 14th Amendment lately, with the news that several states—including Pennsylvania, Arizona, Oklahoma, Georgia, and South Carolina—may launch efforts to deny automatic citizenship to such children.

Critics claim that anyone born in the United States is automatically a U.S. citizen, even if their parents are here illegally. But that ignores the text and legislative history of the 14th Amendment, which was ratified in 1868 to extend citizenship to freed slaves and their children.

The 14th Amendment doesn’t say that all persons born in the U.S. are citizens. It says that “[a]ll persons born or naturalized in the United States and subject to the jurisdiction thereof” are citizens. That second, critical, conditional phrase is conveniently ignored or misinterpreted by advocates of “birthright” citizenship.

Critics erroneously believe that anyone present in the United States has “subjected” himself “to the jurisdiction” of the United States, which would extend citizenship to the children of tourists, diplomats, and illegal aliens alike.

But that is not what that qualifying phrase means. Its original meaning refers to the political allegiance of an individual and the jurisdiction that a foreign government has over that individual.

The fact that a tourist or illegal alien is subject to our laws and our courts if they violate our laws does not place them within the political “jurisdiction” of the United States as that phrase was defined by the framers of the 14th Amendment.

This amendment’s language was derived from the 1866 Civil Rights Act, which provided that “[a]ll persons born in the United States, and not subject to any foreign power” would be considered citizens.

Sen. Lyman Trumbull, a key figure in the adoption of the 14th Amendment, said that “subject to the jurisdiction” of the U.S. included not owing allegiance to any other country.

In the famous Slaughter-House cases of 1872, the Supreme Court stated that this qualifying phrase was intended to exclude “children of ministers, consuls, and citizens or subjects of foreign States born within the United States.” This was confirmed in 1884 in another case, Elk vs. Wilkins, when citizenship was denied to an American Indian because he “owed immediate allegiance to” his tribe and not the United States.

American Indians and their children did not become citizens until Congress passed the Indian Citizenship Act of 1924. There would have been no need to pass such legislation if the 14th Amendment extended citizenship to every person born in America, no matter what the circumstances of their birth, and no matter who their parents are.

Of course, the judges in that case were strongly influenced by the fact that there were discriminatory laws in place at that time that restricted Chinese immigration, a situation that does not exist today.

The court’s interpretation of the 14th Amendment as extending to the children of legal, noncitizens was incorrect, according to the text and legislative history of the amendment. But even under that holding, citizenship was not extended to the children of illegal aliens—only permanent, legal residents.

It is just plain wrong to claim that the children born of parents temporarily in the country as students or tourists are automatically U.S. citizens: They do not meet the 14th Amendment’s jurisdictional allegiance obligations. They are, in fact, subject to the political jurisdiction (and allegiance) of the country of their parents. The same applies to the children of illegal aliens because children born in the United States to foreign citizens are citizens of their parents’ home country.

Federal law offers them no help either. U.S. immigration law (8 U.S.C. § 1401) simply repeats the language of the 14th Amendment, including the phrase “subject to the jurisdiction thereof.”

The State Department has erroneously interpreted that statute to provide passports to anyone born in the United States, regardless of whether their parents are here illegally and regardless of whether the applicant meets the requirement of being “subject to the jurisdiction” of the U.S. Accordingly, birthright citizenship has been implemented by executive fiat, not because it is required by federal law or the Constitution.

We are only one of a very small number of countries that provides birthright citizenship, and we do so based not upon the requirements of federal law or the Constitution, but based upon an erroneous executive interpretation. Congress should clarify the law according to the original meaning of the 14th Amendment and reverse this practice.

Originally published by Fox News in 2011