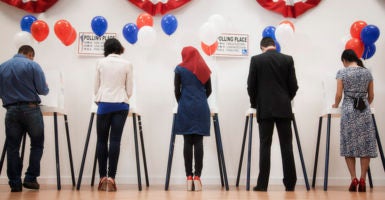 Ensuring election integrity begins with creating and maintaining accurate voter rolls. Voter registration is an essential part of the process, and it should be a bipartisan effort.(Photo: Hill Street Studios Blend Images/Newscom)

As Election Day rapidly approaches, the radical Left is making yet another absurd claim: that requiring voter registration is a “voter suppression” tool.

Registration is essential to assure the integrity of elections. It allows election officials to verify the eligibility and identity of voters. It also enables them to make sure they will have enough ballots in polling places that use paper ballots — and that’s the majority of jurisdictions across the U.S.

The Washington Times recently reported that the Texas Democratic Party “asked noncitizens to register to vote, sending out applications to immigrants with the box [on] citizenship already checked ‘Yes.’” And Texas is not the only state where the accuracy and integrity of the voter-registration process is imperiled.

To improve the accuracy of the state’s records, Georgia legislators last year passed a law requiring voter-registration-application information to match a “driver’s license, state ID card or Social Security record.” Inconsistencies can cause a voter’s registration to be flagged as “pending” while the discrepancy is investigated.

Stacey Abrams, the Democratic candidate for governor, accuses the Republican candidate and current secretary of state, Brian Kemp, of “voter suppression” simply for complying with this law.

But here’s the rub: A “pending” status does not bar anyone from voting. All they need do is “show a government photo ID that substantially matches the registration application.” Even if the voter’s information can’t be verified on the spot, the voter can cast a provisional ballot that will be counted once the registration information is verified by local election officials.

How can that be “voter suppression?”

So why the uproar about voter registration? Abrams claims that Kemp’s effort to enforce the law is an “intentional move” to suppress votes, especially of minority voters. Kemp has refuted those claims and says that application discrepancies that make registrations “pending” are due to “sloppy forms” submitted by the New Georgia Project, a group founded by Abrams herself in 2014 that “set out to sign up 800,000 new young and minority voters.”

The real issue here is a disregard for election integrity. And that includes those who are calling for an end to traditional voter registration in favor of automatic voter registration based on government databases such as driver’s licenses and property-tax records.

While government records are useful for verifying voter registrations, research shows they would be ineffective in creating accurate voter rolls. One of the most glaring problems with these databases is that they cannot verify a basic eligibility requirement for voting — citizenship. Noncitizens can receive driver’s licenses in all 50 states, and illegal aliens are receiving licenses in more than a dozen states, including California. Noncitizens also pay property taxes. Automatic voter registration would register all such ineligible individuals.

Moreover, individuals can be listed multiple times in different government databases that would be a source for automatic registration. For example, one person may pay taxes in multiple counties and multiple states, raising the possibility that he could vote multiple times, in multiple jurisdictions.

Such issues came to light recently in California, where the DMV admitted that, in just the last two months, it had mistakenly registered 24,500 ineligible individuals, including noncitizens. The problem arose because of the state’s new voter-registration process, which automatically registers people who renew or replace their driver’s licenses. The error came to light only after a Canadian citizen told the media he had been improperly registered by the state.

No evidence exists that eliminating voter registration will increase turnout. In fact, Census Bureau data from the 2008 election found that individuals who were not registered to vote did not cite registration problems as the reason for not voting. Instead, 46 percent were not interested in the election and 35 percent listed other reasons, such as “not being eligible to vote, thinking their vote would not make a difference, not meeting residency requirements, or difficulty with English.” The biggest reason for individuals’ not registering and not voting is a lack of interest in politics and candidates, which has nothing to do with registration.

The registration fight in Georgia is just part of a larger effort by the Left to undo any reforms that increase the security and integrity of the voter-registration and election process. Ensuring election integrity begins with creating and maintaining accurate voter rolls. Voter registration is an essential part of the process, and it should be a bipartisan effort.