A Rape Survivor Just Won the Nobel Peace Prize. ‘Feminists’ Are Nowhere to Be Found. 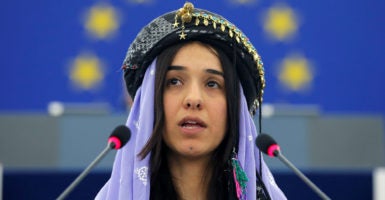 Nadia Murad is a Yazidi human rights activist from Iraq, and the author of the book "The Last Girl: My Story of Captivity, and My Fight Against the Islamic State." (Photo: Reuters/Vincent Kessler/File Photo/Newscom)

As feminists were busy peddling their “War on Women” narrative in the U.S., Yazidi sex slave survivor Nadia Murad was honored with the Nobel Peace Prize for fighting a real War on Women in the Middle East.

Nadia was honored for her efforts to end the use of sexual violence as a weapon of war, together with Dr. Denis Mukwege of the Democratic Republic of Congo, who has been a relentless healer and advocate for women.

Their stories serve as an important reminder that as American women debate what constitutes enough evidence to block a nominee from taking a seat on the Supreme Court, corroboration and evidence are abundant in places such as northern Iraq, where hundreds of women and girls are still enslaved and routinely subjected to rape.

Nadia was abducted in northern Iraq in August 2014, when ISIS took over her village. Militants gave the Yazidi people—a Kurdish and Arabic-speaking religious minority—two choices: Convert to Islam or die. Refusing to give in, Nadia watched men get massacred and family members march to their graves.

At just 21 years old, she was kidnapped alongside an estimated 3,000 other Yazidi women and girls, traded as sex slaves from one ISIS fighter to another. She was forced to pray, dress up, and apply makeup in preparation for her rape, which was often committed by gangs.

For years, it seemed the world didn’t care about Nadia’s story and the thousands of others like it. It took two years for then-Secretary of State John Kerry to declare crimes against Yazidis, Christians, and Shiite Muslims genocide, and the United Nations as well.

Thousands of Yazidis remain missing, including at least 1,300 women and children, and the question of how to hold ISIS accountable for its unspeakable crimes remains unanswered.

Nadia is a lonely voice in the fight against ISIS genocide. After making the genocide designation, the Obama administration did little to hold ISIS accountable for its crimes or to alleviate the suffering of survivors. The Trump administration is trying to right those wrongs by providing aid to the most vulnerable victims of ISIS genocide, but a lot of work remains to be done.

“The world should bear its moral and legal responsibility and ensure its proper and fair accountability,” Nadia said as she accepted her Nobel Peace Prize. “The sexual violence and conflicts in our towns and cities must be stopped.”

It’s strange how women who self-identify as feminists get so worked up over unsubstantiated allegations of sexual assault, yet so callously overlook human rights injustices staring them in the face.

In the #MeToo era, feminists are rightly concerned about women being heard. It appears that Nadia’s with them, too.

“My hope is that all women who speak about their stories of sexual violence are heard and accepted, that their voices are heard so they feel safe,” she said.

But Nadia’s story is falling on deaf ears. Because being “heard” requires others to listen.

Listening to a Nobel Peace Prize winner whose mission is to bring back life after being destroyed by sexual violence and war is the least feminists can do as the freest and most liberated women in the world.

Sure, it’s easy to get caught up in the moment. There’s certainly no shortage of issues to debate. But it’s our job as feminists to look beyond ourselves and realize that Nadia’s fight is our fight, no matter what’s happening here in the U.S.