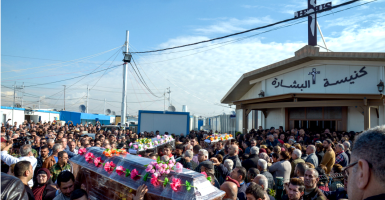 Christian Kurds carry the coffins containing 6 Iraqi Christian family members. The Christian population in Iraq has declined from 1.4 million in 2003, to only 275,000 today. (Photo: Marcos Andronicou/SIPA/Newscom)

Secretary of State John Kerry declared that the Islamic State of Iraq and Syria (ISIS) committed genocide against Yazidis, Christians, and Shiite Muslims.

Genocide, as defined by the U.S., constitutes “[w]hoever, whether in time of peace or in time of war and with the specific intent to destroy, in whole or in substantial part, a national, ethnic, racial, or religious group as such.”

Among the “acts” that constitute genocide are killing, causing serious bodily or mental harm, attempting to destroy an entire people group, and transferring children from one group to another.

The Department of State’s decision to label ISIS acts as genocide confirms that all of these acts have been carried out by ISIS against religious minority groups, especially women and girls.

And indeed, ISIS has carried out all of these acts.

In August 2014, ISIS blockaded Yazidis on Mount Sinjar, depriving them of access to food and water in an attempt to starve them to death. ISIS actions prompted U.S. airstrikes against ISIS to ensure that Yazidis were freed. However, stories proliferated of Yazidi women and girls taken by ISIS as sex slaves and sold on the open market, suggesting that persecution of the religious minority continued long after their release.

A new report issued by the Knights of Columbus and In Defense of Christians documented similar persecution against Christians. The report documented 1,131 Christians killed between 2003 and 2014. One church leader estimated even higher casualties—over one thousand Christians killed by ISIS in Syria, and more than 500 in Iraq. And, in fact, the Christian population in Iraq has declined from 1.4 million in 2003 to only 275,000 today.

Similar genocidal acts have been documented against Shi’a Muslims. In 2014, the United Nations Office of the High Commissioner for Human Rights reported ISIS killings of predominantly Turkmen Shi’a after seizing their town of Amerli in June 2014, including the systematic execution of at least 100 Turkmen in a single incident. It also documented abductions of Shabak families by ISIS in a similar fashion to the way ISIS has treated Yazidis.

The State Department’s decision to label ISIS acts genocide came on the heels of a “sense of Congress” passed by the U.S. House of Representatives on Monday, which stipulated that the U.S. Department of State had until today to acknowledge ISIS acts as genocide. This is the first time that the United States has recognized a situation as genocide since Darfur in 2004.

While the declaration is welcomed, it is only a first step.

What we are seeing today under ISIS is genocide. We should not be afraid of using that word. Politicians worldwide, unfortunately, are afraid of this because genocide has legal implications for governments, for all of us. But we should call a spade a spade. When genocide is committed we are obliged to take steps to prevent it. We are obliged to help the victims and the survivors.

Now is the hardest part—determining what the U.S. must do next to prevent future genocide from occurring and to hold ISIS to account for their despicable acts of violence.