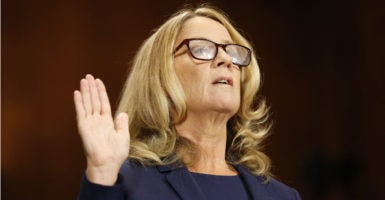 “A ‘he said, she said’ case is incredibly difficult to prove. But this case is even weaker than that,” writes Rachel Mitchell, who questioned Kavanaugh accuser Christine Blasey Ford. (Photo: Xinhua/Sipa USA/Newscom)

The woman who accuses Supreme Court nominee Brett Kavanaugh of sexually assaulting her when they were teens tells a story with multiple inconsistencies, the sex crimes prosecutor who questioned her has told Republicans on the Senate Judiciary Committee.

A “reasonable prosecutor” would not move forward based on this evidence, the veteran sex crimes prosecutor said.

“In the legal context, here is my bottom line: A ‘he said, she said’ case is incredibly difficult to prove. But this case is even weaker than that,” Rachel Mitchell, who questioned Christine Blasey Ford Thursday during a committee hearing, writes in a Sept. 30 memo to the lawmakers about Ford’s allegations against Kavanaugh.

“Dr. Ford identified other witnesses to the event, and those witnesses either refuted her allegations or failed to corroborate them,” Mitchell, chief of the Special Victims Division of the Maricopa County, Arizona, Attorney’s Office, says in the memo.

“For the reasons discussed below, I do not think that a reasonable prosecutor would bring this case based on the evidence before the committee. Nor do I believe that this evidence is sufficient to satisfy the preponderance-of-the-evidence standard.”

Ford, now a 51-year-old research psychologist who lives in Northern California, repeated for the committee what she told The Washington Post for a story published Sept. 16: that Kavanaugh, now 53, held her down, groped her, and tried to remove her clothes in a bedroom during a house party in the early 1980s in Montgomery County, Maryland.

Here are seven of the inconsistencies or instances of missing “appropriate detail” that Mitchell identifies in the memo.

2. Ford Doesn’t Recall How She Got Home

“Perhaps most importantly, she does not remember how she got from the party back to her house,” Mitchell writes, adding:

She also agreed for the first time in her testimony that she was driven somewhere that night, either to the party or from the party or both. Dr. Ford was able to describe hiding in the bathroom, locking the door, and subsequently exiting the house.

She also described wanting to make sure that she did not look like she had been attacked. But she has no memory of who drove her or when. Nor has anyone come forward to identify him or herself as the driver. Given that this all took place before cell phones, arranging a ride home would not have been easy.

Indeed, she stated that she ran out of the house after coming downstairs and did not state that she made a phone call from the house before she did, or that she called anyone else thereafter.

3. No One Has Come Forward to Corroborate Ford’s Account

“Dr. Ford’s account of the alleged assault has not been corroborated by anyone she identified as having attended—including her lifelong friend,” Mitchell writes in her memo.

“Dr. Ford testified to the committee that another boy attended the party, but that she could not remember his name,” Mitchell writes. “No others have come forward.”

Those Ford identifies all denied being at the party, she notes.

Most relevantly, in her first statement to the committee, Ms. Keyser stated through counsel that, ‘[s]imply put, Ms. Keyser does not know Mr. Kavanaugh and she has no recollection of ever being at a party or gathering where he was present, with, or without, Dr. Ford.’ In a subsequent statement to the committee through counsel, Ms. Keyser said that ‘the simple and unchangeable truth is that she is unable to corroborate [Dr. Ford’s allegations] because she has no recollection of the incident in question.’

In Ford’s then-confidential July 30 letter to Sen. Dianne Feinstein, D-Calif., she says that after the assault, at which Judge was present, she heard Kavanaugh and Judge talking to other partygoers downstairs while she hid in a bathroom, Mitchell writes.

“But according to her testimony, she could not hear them talking to anyone,” Mitchell writes.

Mitchell also notes that Ford has not been consistent in saying who exactly was at the party.

“According to The Washington Post’s account of her therapy notes, there were four boys in the bedroom in which she was assaulted,” Mitchell writes.

Ford told the Post that the therapist’s notes were wrong because she had said a total of four boys were at the party, but only two in the bedroom, Mitchell adds.

In her letter to Senator Feinstein, she said ‘and 4 others’ were present at the party. In her testimony, she said there were four boys in addition to Leland Keyser and herself. She could not remember the name of the fourth boy, and no one has come forward.

“Dr. Ford has struggled to recall important recent events relating to her allegations, and her testimony regarding recent events raises further questions about her memory,” Mitchell’s memorandum to committee Republicans says.

Ford “does not remember if she actually had a copy of the notes when she texted the Washington Post WhatsApp account on July 6,” Mitchell writes.

Ford did not share any therapy notes with the committee, she adds.

6. Ford’s Timing in Making the Accusation

Mitchell writes that Ford’s answer to why she disclosed the allegations when she did is questionable:

She claimed originally that she wished for her story to remain confidential, but the person operating the tipline at The Washington Post was the first person other than her therapist or husband to whom she disclosed the identity of her alleged attacker.

She testified that she had a ‘sense of urgency to relay the information to the Senate and the president.’ She did not contact the Senate, however, because she claims she ‘did not know how to do that.’ She does not explain why she knew how to contact her congresswoman but not her senator.

“She maintains that she suffers from anxiety, claustrophobia, and post-traumatic stress disorder,” Mitchell writes of Ford, adding:

The date of the hearing was delayed because the committee was informed that her symptoms prevent her from flying. But she agreed during her testimony that she flies ‘fairly frequently for [her] hobbies and … work.’

Despite this fear of flying, Ford flies to the Mid-Atlantic at least once a year to visit family and has has flown to Costa Rica, French Polynesia, and Hawaii, Mitchell writes.

She also flew to Washington, D.C. for the hearing. Note too that her attorneys refused a private hearing or interview. Dr. Ford testified that she was not ‘clear’ on whether investigators were willing to travel to California to interview her.

It therefore is not clear that her attorneys ever communicated Chairman Grassley’s offer to send investigators to meet her in California or wherever she wanted to meet to conduct the interview.