6 Things to Know About the Prosecutor Who Will Quiz Kavanaugh, Ford and About the Hearing 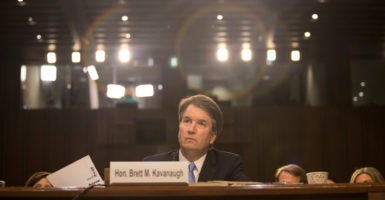 Supreme Court nominee Brett Kavanaugh testifies on the third day of his confirmation hearings before the Senate Judiciary Committee earlier this month. He goes back before the committee Thursday. (Photo: Alex Wroblewski/Reuters/Newscom)

The Arizona sex crimes prosecutor who will conduct some of the questioning at Thursday’s Senate Judiciary Committee showdown on the Supreme Court nomination of Judge Brett Kavanaugh is highly regarded for prosecuting offenders, including a priest and a police officer.

Rachel Mitchell earned recognition for her efforts from Arizona’s Democratic governor and attorney general at the time.

Mitchell is the division chief of the Special Victims Division of the Maricopa County Attorney’s Office. It consists of bureaus dealing with sex crimes and family violence.

She will be in the national spotlight Thursday asking questions of Kavanaugh, President Donald Trump’s nominee to the high court, and Christine Blasey Ford, the Northern California woman who has accused Kavanaugh of sexual assault when they were both teens.

Ford has said that sometime in the early 1980s, Kavanaugh pinned her to a bed, groped her, and attempted to remove her clothes.

That likely means committee Republicans will defer to Mitchell to ask questions, but the panel’s Democrats will make their own inquiries.

“As I have said, I’m committed to providing a forum to both Dr. Ford and Judge Kavanaugh on Thursday that is safe, comfortable and dignified,” Grassley said in a statement. “The majority members have followed the bipartisan recommendation to hire as staff counsel for the committee an experienced career sex-crimes prosecutor to question the witnesses at Thursday’s hearing.”

I’ve worked to give Dr. Ford an opportunity to share serious allegations with committee members in any format she’d like after learning of the allegations.

I promised Dr. Ford that I would do everything in my power to avoid a repeat of the ‘circus’ atmosphere in the hearing room that we saw the week of September 4.

I’ve taken this additional step to have questions asked by expert staff counsel to establish the most fair and respectful treatment of the witnesses possible.

Here are key things to know about Mitchell and the hearing:

Some media critics were quick to attack Mitchell, erroneously so.

Mitchell was already attacked for working for the same county government as controversial former Sheriff Joe Arpaio, who took a decidedly anti-immigrant stance and pushed the envelope on legal enforcement.

Only this crowd of clueless old white guys would pick someone from Sheriff Joe’s operation. I was saying no self-respecting lawyer would take the job of giving cover to GOP cowards. I was right.

FWIW: Joe Arpaio says he does not know who Rachel Mitchell is. He could not identify where she worked/background.

Everyone can go ahead and stop invoking Joe Arpaio’s name. Rachel Mitchell works for the Maricopa County Attorney’s Office, not the Sheriff’s Office. They’re not the same agency. Just the same county.

The Washington Post noted that Mitchell is a registered Republican and has donated to the campaign of Arizona Republican Attorney General Mark Brnovich.

Mitchell has been a prosecutor since 1993.

In 2003, Arizona Gov. Janet Napolitano and state Attorney General Terry Goddard, both Democrats, participated in an event recognizing Mitchell as the Outstanding Arizona Sexual Assault Prosecutor of the Year.

In 2006, the Maricopa County Attorney’s Office named her the Prosecutor of the Year.

Also, in 2006, the Arizona Children’s Justice Task Force awarded her with the Outstanding Child Abuse Legal Professional Award for Excellence.

In 2013, the the Arizona Prosecuting Attorneys’ Advisory Council presented Mitchell with the David R. White Excellence in Victim Advocacy Award.

Her supervisor, Maricopa County Attorney Bill Montgomery, told the Arizona Republic newspaper that Mitchell is a “professional, fair, objective prosecutor” who has a “caring heart” for victims. He added, “The people of America are well-served with her involvement in this process.”

She ran the bureau responsible for the prosecution of sex-related felonies, including child molestation, adult sexual assault, cold cases, child prostitution, and computer-related sexual offenses, according to the Senate Judiciary Committee.

She supervised a satellite bureau responsible for prosecuting those crimes, as well as stalking, child physical abuse and neglect, and elder abuse.

In 2015, Mitchell prosecuted and won a conviction of a 13-year veteran of the Mesa, Arizona, Police Department for groping two women—one who was passed out at the time, the Phoenix New Times reported.

The year before, she also prosecuted a Scottsdale, Arizona, church volunteer for molesting children, while serving as a church babysitter and camp counselor over a seven-year period, Fox News reported, noting that he was sentenced to 30 years in prison.

In 2005, she prosecuted a Catholic priest, Paul LeBrun, who was sentenced to 111 years in prison for sexually abusing boys during the 1980s and 1990s, Reuters reported.

Mitchell said the sentence provides “vindication for these victims, and they need that.”

“It also tells people who have been victimized by people in authority that someone is listening and will do something about it,” she added.

Mitchell has been an instructor, teaching detectives, prosecutors, child protection workers, and social workers on the best practices for forensic interviews of victims of sex crimes.

She has also done training sessions for churches, explaining how to spot and report sexual abuse.

“Individually, I work with lots of different churches and denominations by educating them and raising their awareness,” she told Frontline, a religious publication. “I have also taught organizations such as schools and churches on the Arizona mandatory-reporting law.

“That is not necessarily just prevention, but response, too. We also go out as a bureau to educate parents and kids on safety issues, including online safety issues,” Mitchell said.

In his statement, Grassley also said:

The goal is to depoliticize the process and get to the truth, instead of grandstanding and giving senators an opportunity to launch their presidential campaigns.

I’m very appreciative that Rachel Mitchell has stepped forward to serve in this important and serious role. Ms. Mitchell has been recognized in the legal community for her experience and objectivity.

Democrats and media commentators have repeatedly noted that all 11 Republicans on the Senate Judiciary Committee are men, noting the optics of men interrogating a woman about the allegation.

Mitchell is a registered Republican, and in 2014, the Maricopa County Commission on Trial Court Appointments recommended her as one of nine candidates to then-Gov. Jan Brewer, a Republican, for consideration as a Maricopa County Superior Court judge, the Arizona Republic reported.

“It’s a good step to take if you want to make the hearing productive and credible as possible,” Thomas Jipping, deputy director of the Edwin Meese III Center for Legal and Judicial Studies at The Heritage Foundation, said of bringing in the career prosecutor from outside the Senate.

“The only reason to oppose Rachel Mitchell’s participation is if you want the hearing to be something other than productive and credible,” Jipping told The Daily Signal.

The prosecutor’s state of origin is also relevant.

Sen. Jon Kyl returned to the Senate on Sept. 5 when he was appointed to fill the unexpired term of the late Sen. John McCain. Kyl had previously served three Senate terms from 1995 to 2013.

Before his appointment, Kyl had served as a counsel in seeking to shepherd the Kavanaugh nomination through the Senate before Arizona Gov. Doug Ducey named him to the Senate seat.

However, Arizona’s other Republican senator, Jeff Flake—who succeeded Kyl when he stepped down in 2013, but who isn’t running for re-election this year—has raised questions about whether he would vote for Kavanaugh. He insisted on hearing first from Ford.

The hearing is set for Thursday.

Grassley gave notice Tuesday of a possible meeting on Friday for a potential committee vote on Kavanaugh’s nomination. Judiciary Committee rules require at least three days’ notice for the chairman to schedule a business meeting, so he had to at least give notice on Tuesday to keep the option of a Friday vote open.

At Thursday’s hearing, Grassley, and the ranking member, Sen. Dianne Feinstein, D-Calif., will make opening statements. Those statements have no time limit.

Feinstein held a letter from Ford since July, but did not announce her knowledge of the allegation until this month, after the four-day Kavanaugh confirmation hearings were thought to have concluded.

Next, Ford will be sworn in under oath and have the opportunity to give an opening statement with no time limitation.

After that, questions will begin.

Each senator will then have the opportunity to ask questions of Ford, but any senator may defer to another committee member or to staff counsel. That would be Mitchell for the Republicans.

At Ford’s request, each senator will have five minutes of questioning. Also, in response to her request, the committee will limit questioning to one round.

Senate Democrats on the committee have objected to those two requests from Ford.

Questions will alternate between the Republican and Democratic committee members, or staff counsel. It’s expected that in most cases, Republican senators will defer to Mitchell to ask questions.

Next, Kavanaugh will give testimony responding to Ford’s allegations. The process will be the same.

When it comes to questioning Kavanaugh, Jipping anticipates that Republican senators will be involved directly in the questioning.

“It has been Democrats that want to silence her. Democrats have not wanted a hearing,” said Jipping, a former chief counsel for Republican Sen. Orrin Hatch on the committee. “Chairman Grassley has worked to make sure Dr. Ford will be heard under circumstances that treat her allegations seriously and responsibly.”