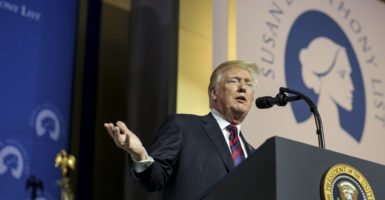 The Trump administration has terminated a government contract to buy fetal tissue from a research firm and will conduct an audit of any such research subsidized by federal taxpayers.

Earlier this year, the Food and Drug Administration signed a one-year, $15,900 contract with Advanced Bioscience Resources to acquire human fetal tissue “for implantation into severely immune-compromised mice to create chimeric animals that have a human immune system.”

The contract, first reported by CNS News, prompted 45 pro-life leaders to sign onto a letter to Secretary of Health and Human Services Alex Azar calling for an end to the government’s use of tissue from aborted babies for research.

The Susan B. Anthony List led the effort to expose the government contract with the California-based research firm.

Late Monday, the Department of Health and Human Services issued a statement announcing termination of the contract:

After a recent review of a contract between Advanced Bioscience Resources Inc. and the Food and Drug Administration to provide human fetal tissue to develop testing protocols, HHS was not sufficiently assured that the contract included the appropriate protections applicable to fetal tissue research or met all other procurement requirements.

The Food and Drug Administration’s presolicitation notice had said that Advanced Bioscience Resources “is the only company in the U.S. capable of supplying” the fetal tissue, and “no other company or organization is capable of fulfilling the need.”

Advanced Bioscience Resources reportedly is among the entities under referral for a criminal investigation into whether they profited from the sale of tissue from aborted babies. Among the company’s sources for fetal tissue are Planned Parenthood-affiliated clinics.

In 2015, the pro-life Center for Medical Progress released a series of hidden-camera videos in which officials and others in the abortion industry appeared to discuss selling aborted baby body parts.

The videos led to a House select committee investigation, and renewed calls for Congress to defund Planned Parenthood.

The most recent spending bill passed by Congress maintained spending for Planned Parenthood, however.

The statement Monday said the Department of Health and Human Services “has initiated a comprehensive review of all research involving fetal tissue to ensure consistency with statutes and regulations governing such research, and to ensure the adequacy of procedures and oversight of this research in light of the serious regulatory, moral, and ethical considerations involved.”

“Finally, HHS is continuing to review whether adequate alternatives exist to the use of human fetal tissue in HHS-funded research and will ensure that efforts to develop such alternatives are funded and accelerated.”

The letter to Azar earlier this month from the 45 pro-life leaders said:

We were shocked and dismayed at the news report that the Food and Drug Administration (FDA) has signed a contract to purchase ‘fresh’ aborted fetal organs from Advanced Bioscience Resources, for the purpose of creating humanized mice with human immune systems. We expect far better of our federal agencies–especially under the leadership of a courageous pro-life president–entrusted with the health of American citizens.

It is completely unacceptable to discover that the FDA is using federal tax dollars and fomenting demand for human body parts taken from babies who are aborted. … The federal government must find ethical alternatives as soon as possible, and should end all association with those who participate in any trafficking or procurement of aborted baby organs. No taxpayer dollars should continue to go to this gruesome practice.