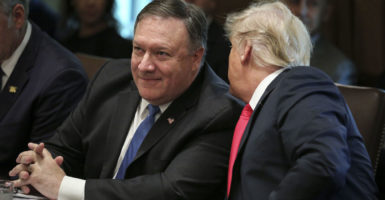 President Trump talks to Secretary of State Mike Pompeo during a Cabinet meeting in the White House on Aug. 16. (Photo: Oliver Contreras/SIPA/Newscom)

Secretary of State Mike Pompeo reaffirmed Friday that the Trump administration is committed to religious liberty, both at home and abroad.

Speaking at the conservative Values Voter Summit in Washington, Pompeo said that more than 80 percent of the world’s population lives in countries that place significant limitations on religious freedom.

He singled out Iran and China.

“We are assuring human dignity by advancing one of our most cherished, indispensable liberties, enshrined in the First Amendment. It is our religious liberty,” said Pompeo, a former member of the House from Kansas and CIA director before becoming the nation’s chief diplomat in April.

Pompeo talked about the success of getting American detainees released from captivity in North Korea in May.

“Far and away, the greatest highlight to date of my job as secretary of state has been bringing three Americans home from captivity in North Korea,” Pompeo said.

He said the State Department now is focused heavily on securing the release and repatriation of Andrew Brunson, an American pastor who has been held in a Turkish prison for about two years on a charge of “Christianization.”

“We are sparing no effort to return Pastor Brunson home to the United States,” Pompeo said. “He has been wrongly held, and the proper role is to return him here to practice his faith in our great nation.”

The secretary of state addressed the Iranian government’s abuse of religious minorities, such as Christians, Jews, Sunni Muslims, and Baha’i. The government in Tehran is a Shiite Muslim theocracy.

“We are fighting for human dignity of the Iranian people by speaking the truth of the oppressive and corrupt regime that controls those people,” Pompeo said.

The U.S. policy toward Iran has changed since the Trump administration exited and disavowed the Iran nuclear deal that was negotiated by the Obama administration.

“After President Trump withdrew from the flawed deal, he gave momentum to a new strategy to force a change in the Iranian regime’s behavior,” Pompeo said. “Part of this strategy is to make sure the voices inside Iran crying out for accountability, justice, and religious freedom know that the United States is with them.

“We stand with the Christians, the Jews, the Sunnis, the Baha’i, and all the other faith groups who have had their human dignity violated by this regime,” he said.

He also called out China’s abuse of religious liberty.

“Hundreds of thousands, and possibly millions, of leaders are held in so-called ‘re-education’ camps, where they are forced to endure severe political indoctrinations and awful abuses,” Pompeo said.

“Their religious beliefs are decimated. We are concerned, too, about the government crackdown on Christians in China, which includes tactics like closing churches, burning Bibles, and ordering followers to renounce their faith,” he added.

Earlier this week, some Democrats criticized Pompeo for addressing the Values Voter Summit, which is hosted by the conservative Family Research Council.

“There were some folks who didn’t want me to come here today.  I don’t know if any of you read about that,” Pompeo quipped.

“The value voters that are here are American citizens. They care deeply about our foreign policy. This administration has put a premium on religious freedom internationally,” Perkins told The Daily Signal.