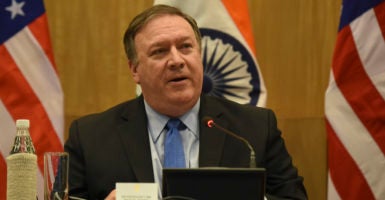 Secretary of State Mike Pompeo speaks with reporters Sept. 6 after meeting with his Indian counterpart in New Delhi. Pompeo is scheduled to speak Friday at the Values Voter Summit in Washington. (Photo: Indraneel Chowdhury/NurPhoto/Sipa USA/Newscom)

Democrats, including at least one former aide to Hillary Clinton, express outrage that Secretary of State Mike Pompeo will speak Friday at the Values Voter Summit, a 12-year-old annual event focused on traditional family values.

But Politico, in a story about the flap published Tuesday, ignores speeches Clinton gave to politically charged groups while she was secretary of state from 2009 through early 2013.

Politico reports that critics on the left criticized Pompeo for his scheduled speech at the Values Voter Summit, for which the main organizer is the Family Research Council, a conservative education and policy group.

Among indignant Democrats quoted was Philippe Reines, an aide to Clinton when she was President Barack Obama’s first secretary of state who also was a key player in her two campaigns for president.

Clinton, however, spoke while secretary of state to the Planned Parenthood Federation of America Gala in Houston on March 27, 2009. Planned Parenthood, the nation’s largest abortion provider, is a heavy political fundraising force for the Democratic Party.

Clinton, there to receive the Margaret Sanger Award, named for the eugenics advocate and Planned Parenthood founder, continued:

Yet we know that Margaret Sanger’s work here in the United States and certainly across our globe is not done. …

This is and has been for many years a matter of personal and professional importance to me, and I want to assure you that reproductive rights and the umbrella issue of women’s rights and empowerment will be a key to the foreign policy of this [Obama] administration.

Clinton also spoke at the Center for American Progress on Oct. 12, 2011, during an event called American Global Leadership.

“I remember when CAP was literally just a twinkle in John Podesta’s eye,” Clinton said of Podesta, who started the liberal organization and would go on to run her failed 2016 presidential campaign. She added:

And now, every day, you’re contributing to our national debate, and increasingly, the global debate. You’re helping those of us in government, which includes quite a few CAP alumni, see the trend lines beyond the headlines. So I thank each and every one of you for being in support of this important mission.

At the time, Reines was Clinton’s deputy assistant secretary of state for strategic communications.

Nevertheless, Reines told Politico: “It’s sort of a given when you become secretary of state that you are representing the United States, and it’s particularly important to represent a unified country.”

He noted that Clinton skipped the 2012 Democratic National Convention in Charlotte, saying, “We hewed to it religiously.”

Politico reported that “while officials and experts did not rule out the possibility that past secretaries of state had attended events similar to the Values Voter Summit—either on the right or left of the political spectrum—none reached by Politico could recall any similar cases of a secretary having done so.”

State Department spokeswoman Heather Nauert said the speech will not be about partisan politics.

“If speaking about protecting human rights and liberty, including highlighting the persecution of Christians, Jews, Uighurs Muslims and other religious minorities around the world is considered wrong or offensive, then we as a nation have truly lost our way,” Nauert said in a statement to The Daily Signal. “Secretary Pompeo will continue to advance US foreign policy interests as he continues to advocate on behalf of the oppressed.”

Pompeo is still walking a fine line just by showing up, former and current U.S. officials say. The situation is also potentially fraught given the event is likely to help galvanize Republicans ahead of the upcoming midterm elections.

Politico also quotes former Secretary of State John Kerry’s chief of staff, David Wade, as saying: “It’s not dissimilar from the military. You work hard to keep the secretary of state in a nonpartisan category, because the public and Capitol Hill needs to trust that they’re speaking for the administration and the facts, not politics or partisan purposes.”

The report goes on:

Some pointed out that secretaries of state often speak about foreign policy at conservative or left-leaning institutions—a think tank, for example. … Still, the Values Voter Summit is more explicit than most such events about its goals.