Congress Is Using These Deceptive Tricks to Drive Spending Higher 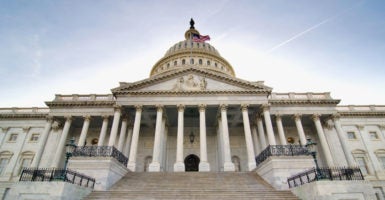 Most "rescissions" in the Senate spending bill do not achieve actual savings. (Photo: rrodrickbeiler/Getty Images)

Congress is up to its old tricks again, trying to pass another massive spending bill that uses gimmicks and tricks to push deficit spending even higher. And it thinks it can hoodwink President Donald Trump into signing it.

Next week, the House is expected to vote on a combined fiscal year 2018 continuing resolution and a fiscal year 2019 spending bill for the departments of Defense, Labor, and Health and Human Services. The “cromnibus” bill would provide over $855 billion in funding for 2019, making up two-thirds of the total discretionary budget. The Senate passed the measure on Tuesday.

If the House passes the Senate version and the president signs it into law, the government will stay open past Sept. 30. But at what cost?

Earlier this year, Congress busted the budget and with a whopping spending deal that ran up nearly $300 billion in new debt. This bill would continue those spending levels.

Take the so-called savings from changes in mandatory programs. The bill claims nearly $8 billion in savings from such changes.

This is the most commonly used gimmick to increase discretionary spending. These “savings” are included in appropriations bills as a rescission of funds, meaning that unspent money is taken back or spending is delayed until a subsequent year. Congress then uses these “savings” and puts the money toward other unrelated programs.

The problem is, almost all of these “rescissions” are of money that was never going to be spent in the first place. Last year’s omnibus bill claimed $17 billion in savings from changes in mandatory programs that had no actual budget effect. In reality, those “saved” funds go toward new spending that only adds to our growing pile of debt.

Earlier this year, the president put forward a better rescission package that would have sent $7 billion in funding for the Children’s Health Insurance Program back to the Treasury. The authorization to spend this money had already expired, so the federal government would not have been able to spend it anyway. But notably, it would have kept Congress from spending the money elsewhere.

Trump’s proposal received a swift response from both sides. At the time, Sen. Pat Toomey, R-Pa., praised the proposal, writing that it would “prevent Congress from using the Children’s Health Insurance Program to subvert our annual budget process and increase spending elsewhere on unrelated programs when no one is looking.”

Yet Schumer was perfectly happy to vote for the current cromnibus, which would rescind or delay over $7.7 billion for the very same program. That’s more money rescinded or delayed than the fiscal year 2018 omnibus rescission and the president’s proposed rescission combined. Where is the outrage now?

Evidently, these “rescission” cuts more often than not are nothingburgers. Senators spin them however they choose.

But the gimmicks in the current cromnibus go beyond rescissions. The bill also contains additional funding that is not subject to the budget caps: $1.9 billion in program integrity money for Health and Human Services, and $67.9 billion in overseas contingency operations funding for the Department of Defense.

Program integrity funding isn’t so bad, as it’s intended to prevent waste, fraud, and abuse within government programs. The bigger problem lies with overseas contingency operations funds. Congress created this flexible category of funding to be used in response to the 9/11 terrorist attacks and the war on terror that followed. It was not intended to be permanent.

It is important to rebuild our military with increased spending, but it must be done in a transparent way. The president has proposed a reasonable plan to phase out overseas contingency operations over the next few years and fund all defense requirements within the base budget. Implementing this plan would make for a more responsible budget.

The appropriations process is about much more than passing bills on time and avoiding a government shutdown. How money is being spent, and the policy enacted within those bills, is just as important as meeting funding deadlines. And on policy, the cromnibus fails on many levels.

The president has little incentive to sign this bill. It fails to address border security funding, one of Trump’s top priorities, and it ignores the cuts he recommended in his budget. Instead, it would continue Washington’s cycle of irresponsible spending and pile on more debt.

Congress can do much better.