Kavanaugh Rules by the Law, Even in Tough Cases 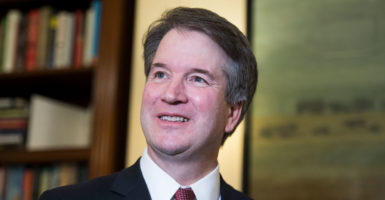 Article 30 of the Massachusetts Constitution, authored by John Adams and adopted in 1780, calls for a “government of laws and not of men.” The principle referred to as “the rule of law” sounds nice in the abstract and fits comfortably in easy situations, but is truly tested in the tough cases.

In the tough cases, a judge’s heart might say something different than the law requires. These cases involve difficult, compelling, or even gut-wrenching facts and put to the test whether the law or the judge must decide the cases that come to court.

Senate Minority Leader Chuck Schumer, D-N.Y., has addressed this issue in the context of a Supreme Court nomination. In 2009, he served on the Judiciary Committee during the confirmation hearing for Sonia Sotomayor, who was a judge on the U.S. Court of Appeals. Schumer noted that, even in “hot-button cases,” she “hewed carefully to the text of statutes, even when doing so results in rulings that go against so-called sympathetic litigants.”

Sotomayor herself embraced this principle, saying: “Whether I’ve agreed with a party or not, found them sympathetic or not, in every case I have decided I have done what the law requires.” Whether a party position is “sympathetic or not,” she explained, she must reach “the result [that] is commanded by law.”

In other words, a judge must approach the tough and the easy cases the same way.

This issue was prominent in last year’s confirmation process for Justice Neil Gorsuch. In one case while he served on the U.S. Court of Appeals, a trucker was fired for abandoning his trailer after its brakes froze. While the court ruled for the trucker, Gorsuch dissented.

He described the conflict between “whether [the employer’s] decision was a wise or kind one” and “whether the decision was an illegal one.” A court, he wrote, must enforce the law as it is, rather than “use the law … to combat all perceived evils lurking in the neighborhood.”

Schumer and other Senate Democrats attacked Gorsuch as a heartless villain. In 2009, Schumer seemed to say that judges must follow the law, even in the tough cases. In 2017, he opposed Gorsuch for doing just that.

Like Sotomayor, Kavanaugh served on the U.S. Court of Appeals and faced his own tough cases. One of them was Doe ex rel. Tarlow v. District of Columbia (2007). This lawsuit was brought on behalf of three women with mental disabilities. As a result of court decrees, they had been under D.C.’s care and living in D.C.’s facilities for decades: Jane Doe I since 1960, Jane Doe II since 1955, and Jane Doe III since 1967.

D.C. law authorizes an agency official to make health care decisions for persons who lack the mental capacity to do so for themselves. For individuals who once possessed such capacity, their “known wishes” must be considered. For those who never possessed such capacity, the decision must be based on a “good faith belief as to the best interests of the patient.” This distinction was essential to this case.

Writing the opinion for a unanimous appeals court, Kavanaugh said no. It may be possible to ascertain the wishes of someone who once had the capacity to make health care decisions (though in many cases, it isn’t), but not of someone who never had that capacity.

Some of Kavanaugh’s opponents have falsely claimed that he believes the government may force women to have abortions without their consent. That, of course, was not the issue in this case. It was whether the law required seeking the consent of a woman who, because of her life-long mental disabilities, could not give it.

The fact-checking website Snopes examined this claim and concluded that it presents “an over-simplified representation of a complicated legal case and misstate[s] Kavanaugh’s role in it.”

But Kavanaugh also stressed that following the medical wishes of patients who, by definition, lack “sufficient mental capacity to appreciate the nature and implications” of the decision might well result in “serious injury or death to the patient, and great potential for abuse and confusion.”

In other words, following the law in this case was not only Kavanaugh’s duty as a judge, but it also reflected concern for the well-being of these women.

Tough cases can pit the judge’s head against his heart—what he knows the law requires against what he wants to do. What could be more heartless, however, than unrestrained government power?

The rule of law protects us all by keeping government in check, and that includes judges.