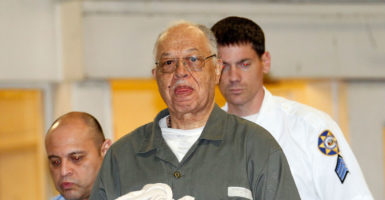 Dr. Kermit Gosnell was sentenced in May 2013 to three life terms in prison in connection with the deaths of three babies born alive at his abortion clinic. (Photo: Yong Kim/MCT/Newscom)

The first trailer is out for a movie about Kermit Gosnell, the late-term abortionist in Philadelphia who went to prison after being convicted in connection with the deaths of three babies.

The movie tells “the shocking true story of the investigation and trial of Dr. Kermit Gosnell—his 30-year killing spree and the political and media establishment that tried to cover it up,” according to the website for the production.

The director is veteran character actor Nick Searcy (TV’s “Justified” and “From the Earth to the Moon”).

Gosnell was sentenced in May 2013 to life in prison without parole after being convicted of first-degree murder in the deaths of three babies born alive at his Philadelphia abortion clinic, Women’s Medical Society. He also was convicted of involuntary manslaughter, 21 felony counts of illegal late-term abortion, and 211 counts of violating an informed consent law.

During Gosnell’s trial, some dubbed the clinic a “house of horrors” because of its unsanitary and illegal conditions.

Davida Johnson, one woman who went to Gosnell’s clinic for an abortion, blames it for her contracting a venereal disease as well as for four miscarriages she subsequently had, the Associated Press reported.

Another woman, Karnamaya Mongar, died after being given an overdose of the pain reliever Demerol at Gosnell’s clinic, an NBC station in Philadelphia reported.

One of Gosnell’s nurses, Lynda Williams, said she “witnessed Gosnell snip the necks of over 30 babies and that he sometimes gave her just the feet of a fetus, to place in formaldehyde,” the station reported.

The cast of “Gosnell,” slated to open in 750 theaters, includes Earl Billings (“Something New”) as Gosnell, Michael Beach (TV’s “Sons of Anarchy” and “The Game”) as District Attorney Dan Molinari, and Dean Cain (the original “God’s Not Dead” and Superman in TV’s “Lois & Clark: The New Adventures of Superman”) as Detective James Wood.

McElhinney is a best-selling author and journalist as well as a film producer and director. Co-producer McAleer, her husband, is an investigative journalist and playwright. They wrote the screenplay based on a story by Andrew Klavan.

The filmmakers raised $2.3 million in 45 days to finance the movie, according to the film’s website.