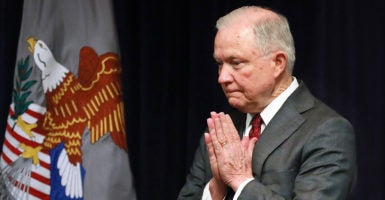 A popular Mexican restaurant chain in Houston faced such a backlash for serving Attorney General Jeff Sessions that its owners disassociated themselves from Trump administration immigration policy and disabled all social media accounts.

Sessions ate Friday night at the family-owned El Tiempo’s Montrose location, one of eight in Houston.

That night, someone posted a photo on the restaurant chain’s official Facebook page showing executive chef Domenic Laurenzo with Sessions and captioned: “We had the honor to [serve] Mr. Jeff Sessions, Attorney General of the United States. Thank you for allowing us to serve you.”

Security is making themselves known outside El Tiempo on Navigation after the Mexican restaurant’s post has sparked controversy. The business hosted AG Sessions while he was in Houston. What do you think of the restaurant’s post? pic.twitter.com/oot6TjeSZr

El Tiempo is owned by Roland Laurenzo and his son, Domenic, also the executive chef.

Soon after the photo with Sessions was uploaded on Facebook, a barrage of hateful comments and harassment directed at the Houston eatery began. The reaction prompted Roland Laurenzo to disable all social media accounts, including Facebook, Twitter, and Instagram, over the weekend.

In a later deleted follow-up post on Facebook, Roland Laurenzo wrote that El Tiempo served Sessions without “thinking about the political situations”:

El Tiempo does not in any way support the practice of separating children from parents or any other practices of the government relative to immigration. The posting of a photograph of the Attorney General at one of our restaurants does not represent us supporting his positions.

The secret service contacted us that a government official was coming to dinner at our establishment and his identity was not know until he walked through the door. The man came to dinner and he was served without us even thinking about the political situations. We were preoccupied with the secret service and catering to their wants and needs.

The only thing on our minds was serving great food and giving great customer service. It was posted without review or approval by ownership and this has lead [sic] to everyone jumping to conclusions that somehow we are involved in this political matter. We don’t approve of anyone separating parents and children.

Sessions was in town on government business, including a speech about violent crime and measures his Justice Department is taking to reduce gang violence, delivered to local law enforcement officials and federal prosecutors at the U.S. Attorney’s Office for the Southern District of Texas.

Rep. Maxine Waters, D-Calif., among others on the left, has urged those who disagree with Trump and his policies to confront his Cabinet officials in public places and cause disturbances.

“People are insulting us in such a dramatic fashion, and we feel like we don’t deserve it,” Laurenzo told KTRK-TV, the local ABC station. “At least temporarily I had it [social media accounts] taken down because I don’t want to be insulted, my children to be insulted, my family to be insulted.”

The backlash wasn’t limited to online. A small group of protesters targeted the restaurant’s Navigation location earlier this week. KTRK (ABC13) reported that fewer than 20 protesters stood outside.

A University of Houston law student, Jessica Lorena, organized the protest. She told Click2Houston: “What we’re trying to do is make sure that we make the people that are attending this restaurant, and its managers, and its owners, uncomfortable.”

One El Tiempo manager reported threats to employees and a suspicious dumpster fire.

A silver lining for the restaurant chain: The outrage and calls for boycotts prompted folks across Texas to make a special stop at an El Tiempo restaurant, according to local news stations.

Good for you El Tiempo!!! I am a Latina, originally from Houston, and will definitely be going to El Tiempo the next time I am in town. #MAGA #LatinasForTrump #Wall

El Tiempo was not the only Mexican restaurant where the attorney general ate during his visit to Houston.

The general manager of La Mexicana, Zulema Gonzalez, confirmed that Sessions had a meal there and told the Houston Chronicle: “We treat everybody the same.”