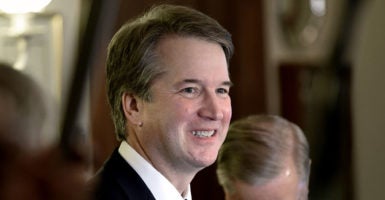 Federal appeals court Judge Brett Kavanaugh was nominated by the president on July 9 to fill a vacancy on the Supreme Court. (Photo: ABA/Newscom)

Legal experts say that decisions by Judge Brett Kavanaugh, President Donald Trump’s nominee to the Supreme Court, will be based on the separation of powers and the rule of law.

“[Kavanaugh] has really emphasized that to keep accountability in government, that the role of Congress and the role of the executive [branch] as being the elected branches of government is to really be playing the lead in making policy, carrying out policy,” said Jennifer Mascott, an assistant professor of law at George Mason University’s Antonin Scalia Law School.

Mascott, a former law clerk to Kavanaugh, made her remarks at a panel discussion Tuesday at The Heritage Foundation that examined Kavanaugh’s record as a federal judge and his nomination to the high court.

“He has conceptualized the role of a judge as that of, more of an umpire, calling balls and strikes. So, that doesn’t always mean that a judge is not going to step in, but it means that a judge is going to try to be independent and fair-minded,” she said.

Kavanaugh, 53, was nominated by Trump on July 9 to fill the seat of Justice Anthony Kennedy, who announced his retirement on June 27. Kavanaugh was nominated in 2003 by President George W. Bush to the U.S. Court of Appeals for the D.C. Circuit, but he was not confirmed until 2006, on a Senate vote of 57-36.

Chris Walker, an associate professor of law at Ohio State University’s Moritz College of Law, said Kavanaugh is committed to upholding the constitutional separation of powers.

“In a Justice Kavanaugh, you are going to see someone motivated by separation of powers … that is going to hold agencies accountable to what Congress has told them what they can and can’t do,” he said.

Justin Walker, an assistant professor of law at the University of Louisville’s Brandeis School of Law in Kentucky and another former law clerk for Kavanaugh, said various cases Kavanaugh has ruled on show the judge’s commitment to the Constitution, history, and tradition.

He said Kavanaugh’s majority opinion in a 2009 case, EMILY’s List v. FEC, a case that challenged Federal Election Commission restrictions on “the ability of nonprofits to raise money and use it to advocate for their chosen causes,” showed Kavanaugh’s commitment to upholding free speech, according to Forbes.

“What he said there is that the FEC’s regulation of these groups was invalid because the FEC was restricting how much money they could spend to speak,” he said.

“He distinguished, as the Supreme Court has done, regulations on donations directly to candidates, which can be regulated,” he said. “He distinguished that from a nonprofit organization like EMILY’s List expenditures on advocacy and speech. … It suggested a principle that it’s just not the government’s job to tell people ‘We want to hear less from you.’”

He also said Kavanaugh’s dissent in Heller v. D.C. (“Heller II”)—in which he wrote that “D.C.’s ban on semi-automatic rifles and its gun-registration requirement are unconstitutional under [the first Heller decision]”—showed support for the history and tradition behind Americans’ Second Amendment rights

“In 2008, the Supreme Court decided that Dick Heller here in D.C. had the right to a handgun in his home for self-defense, a 5-4 conservative majority,” he said. “D.C. responded to that by enacting a host of other gun control measures, including a ban on semiautomatic rifles.”

Heller sued again, and that case went to a panel on the D.C. Circuit that included Kavanaugh.

“Judge Kavanaugh was the only [one] of the three judges who said that Heller had the right to the weapon in question,” he said, adding:

He did it not because he said he likes guns or dislikes guns. His policy preferences really had no bearing on the question.  … He said that if you read [Supreme Court Justice Antonin] Scalia’s opinion in Heller, it suggests that we don’t conduct some kind of free-wheeling balancing test when it comes to a fundamental right, the right to possess a weapon.

That kind of balancing test was done for us by the Founders and the Framers and the ratifiers [of the Constitution] when they put the Second Amendment in the Bill of Rights, and so, the question for a judge is not how great is the government interest, or how narrowly tailored is the regulation in question.

Jamil Jaffer, an adjunct professor of law and director of the National Security Law and Policy Program at GMU’s Antonin Scalia Law School, agreed that Kavanaugh’s record proves he would be a balanced Supreme Court justice.

“You want a judge who has a healthy respect for the role of each branch—including his or her own—and that is the kind of judge that you see in Judge Kavanaugh,” he said.