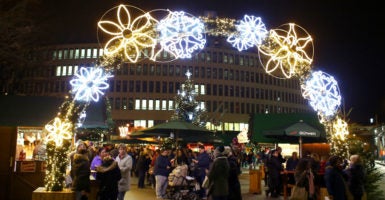 Most were the sons and daughters of a Georgian resident called Siraj Ibn Wahhaj who, along with his wife and sisters, was charged with child cruelty offenses. Human remains found on the site are feared to be those of his disabled child, who he believed required an exorcism.

The 11 children are now being put in foster homes. Yet there is now a fresh twist to this already-disturbing story: One of those foster parents has told authorities that their child was trained at the compound in preparation for a school shooting.

Police did find guns at the compound, and the country sheriff said the suspects were “considered extremist of the Muslim belief.” Wahhaj’s grandfather is actually imam at a mosque that has hosted extremist speakers, including the “Blind Sheikh” Omar Abdel Rahman, and was an unindicted co-conspirator in the 1993 World Trade Center bombing. There is a potential terrorism angle.

Yet as of now, no terrorism charges have yet been brought. More information is needed before this can be considered a terror-related plot as opposed to child abuse and, potentially, murder. But the broader issue of children being used in terror plots certainly is of concern.

Between January 2014 and July 2017, minors (i.e. those aged under 18) were involved in 34 terrorist plots in Europe—16 percent of the total. The youngest was a 12-year-old boy who was detained in December 2016 after attempting to bomb a Christmas market and town hall in Ludwigshafen, Germany.

There are also examples of this phenomenon in Australia and the U.S. We have certainly witnessed it in the Iraq-Syria “caliphate,” where disturbing images—which the Islamic State broadcasts as propaganda—emerged of children as young as 4 years old executing captured prisoners.

The sources of this indoctrination can be multifaceted.

The online radicalization aspect is well known. The dizzying array of social media platforms that teens have access to have proven fertile ground for Islamist recruiters to disseminate their message—often with parents completely oblivious.

However, on occasion, radicalization can also be the parents’ fault.

Take Parviz Khan, a British al-Qaeda supporter who was recorded by authorities discussing with his young children how to slit throats and carry out shootings. (He was eventually jailed for life for planning to behead a British soldier).

Other adults in places of influence can also be responsible: teachers, for example. An ISIS supporter who taught in an Islamic school in London was recently jailed for 25 years after making over 100 students watch beheading videos and perform role-plays carrying out attacks on the police. His long-term plan was to recruit a group of child soldiers who would strike tourist sites and public places throughout the United Kingdom.

But indoctrination need not encourage violence in order to be pernicious. An example, again from the U.K., is that of the “trojan horse” schools scandal in Birmingham.

According to the government’s own 2014 review, Muslim hardliners undertook a “coordinated, deliberate, and sustained” plan to take over several schools in order “to introduce an intolerant and aggressive Islamic ethos.”

They achieved this, the report states, “by gaining influence on the governing bodies, installing sympathetic headteachers or senior members of staff, appointing like-minded people to key positions, and seeking to remove headteachers they do not feel to be sufficiently compliant” by making spurious accusations of racism and “Islamophobia” against non-Muslims until they were essentially forced into resigning their positions.

While those Birmingham children were not being encouraged to carry out acts of violence, they were essentially being encouraged to segregate themselves away from non-Muslims—hardly a good recipe for 21st-century life in Europe—and to reject British values. They would also potentially be more vulnerable to recruitment for violent Islamist causes in the future.

Whether such concerns are relevant to the Wahhaj case will emerge in the weeks and months ahead. Yet what is undoubtedly clear is that children being imbued with an extreme Islamist worldview is a global phenomenon that can only be combated by undermining the entire ideology.