‘Father of Texas’ Under Fire in the City Named for Him 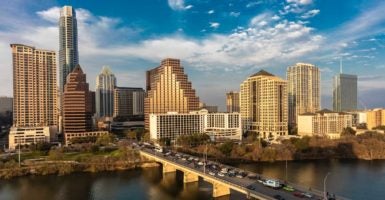 The war on history continues in Texas.

An agency in the city of Austin recently released a memo suggesting renaming numerous streets and roads, removing statues, and generally eliminating references to the Confederacy.

But the recommendations from Austin’s Equity Office didn’t stop with Confederate figures.

Perhaps most absurdly, the memo suggested renaming Austin because Stephen F. Austin, the “Father of Texas” for whom the city is named, owned several slaves and accepted the existence of slavery in the 1820s.

A rather ridiculous and highly inaccurate report from Newsweek, which has not been corrected as of publication of this piece, says Austin was a “former Confederate leader” and founded the city of Austin in 1839.

Both of those “facts” are untrue.

Austin died in 1836 and was not the founder of the city. He never was associated with the Confederacy, which came into being in 1861.

Though these are likely just sloppy factual errors, the labeling of Austin as a Confederate is an illuminating example of where this debate over historical statues and memory is going.

The distinction between “defensible” Founding Fathers and “indefensible” Confederates is blurring as anyone who in any way represents ideas or values not accepted in modernity must not only be denounced, but eradicated from public life.

Stephen F. Austin leaves a complicated legacy to modernity, but no more complicated than most of the founders.

Austin is famous for leading a group of American pioneers to settle in Texas at the behest of the Mexican government, which owned the territory at the time.

After the settlers lived successfully and peacefully for years in the territory, the Mexican government began to curtail their rights for a variety of reasons: fear of their success, ethnic prejudice against whites (an often mutual feeling), and religious bigotry against the largely Protestant settlers who struggled or refused to convert to Catholicism, the official religion of Mexico.

The Mexican government also sought to abolish slavery, which was mostly nonexistent in Mexico at that time, a move that threatened to throw the Texas economy into chaos.

Violence erupted after the Mexican government abolished the Texas Constitution, tried to dissolve the Texas Legislature, and sent in an invading army to impose its will on the settlers.

Austin was a key figure in leading Texas to its independence, and eventually annexation by the United States, cementing his reputation as the Father of Texas (although Sam Houston also bears that honor).

In the struggle, Austin suffered enormously for his people and rotted in prison after Mexican authorities captured him. Eight months after Texas gained its independence in April 1836, he died of pneumonia and sheer physical exhaustion at age 43.

Regarding slavery, scholars say Austin believed it was a social and moral evil and called the institution “the curse of curses.”

However, Austin also believed that Texas in the 1820s and 1830s needed to rely on the slave-powered cotton industry to succeed economically.

“The principal product that will elevate us from poverty is cotton and we cannot do this without the help of slaves,” he wrote in 1824.

Austin debated with himself whether slavery was acceptable, writing in a 1833 letter:

I have been adverse to the principle of slavery in Texas. I have now, and for the last six months, changed my views of that matter; though my ideas are the same as to the abstract principle. Texas must be a slave country. Circumstances and unavoidable necessity [compels] it. It is the wish of the people there, and it is my duty to do all I can, prudently, in favor of it. I will do so.

So Austin was, at most, a tepid but conflicted supporter of slavery who accepted its existence in the Republic of Texas because it was tied to their economy and the people demanded it.

By these standards for erasure from history, men such as Thomas Jefferson, the author of the Declaration of Independence (the greatest anti-slavery tract in history besides the Bible), James Madison, the father of the Constitution, and George Washington, the father of our country, have to go too.

Despite their beliefs that slavery was a social evil that should be abolished over time, they all personally owned slaves and failed to immediately abolish slavery.

If Austin goes, what about Washington, D.C.? Or Washington state?

The truth is, the proposal to change the Texas city’s name is as preposterous as it would be costly.

Even beyond the general problem of attacking history, and the damage and friction it brings, the sheer financial cost of changing the name of a city such as Austin would likely be enormous. The price tag for renaming just a couple of Texas elementary schools is estimated to be in the millions.

If Austin returns to its original name, Waterloo, it would be a perfect metaphor for those who believe in preserving the good of American history if they don’t begin to draw a line and articulate why our past deserves to be preserved.

We don’t need to think that everything men such as Austin and Jefferson did and believed was good to honor their contribution to our country, which has been and certainly is a beacon of liberty and hope for people of all backgrounds the world over.

A society that devotes more time and resources finding ways to destroy its past rather than build for its future will have no past and no future.