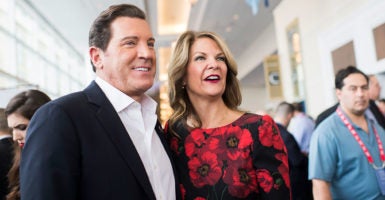 Following multiple calls from President Donald Trump after the death of his son, caused by an overdose on opioids, former Fox News host Eric Bolling knew that the opioid epidemic mattered to the president.

“[The president] told me, ‘I don’t know how you’re doing it, but if I can help let me know,’” Bolling said in a talk Wednesday to conservative high school students at Turning Point USA’s High School Leadership Summit at George Washington University in Washington D.C.

Trump, Bolling said, called him the day after his son’s death.

Bolling, who is now hosting a show with CRTV, said that after his son died, he was in a very deep depression.

Matt Schlapp, the president of the American Conservative Union, invited him to speak at the Conservative Political Action Conference, ACU’s annual event, and share the story of his son.

“I was inundated with young people [after my speech],” Bolling said.

All of those young people had stories, Bolling said, and “what I realized at that moment, is this opioid epidemic is affecting young people.”

“One pill can kill,” he said, adding that an amount of fentanyl equivalent to four grains of salt can kill a 200-pound man.

It was after that speech at CPAC, Bolling said, that he was approached by CRTV to do a show for it, which gave birth to his show “AMericA” on the platform.

Bolling told the crowd of young conservatives that they were “here for a reason,” but that conservatives “got a lot of work to do … to talk to people your age all the way to about 30.”