Tuition-Free College Bill Coming Down the Pipeline From House Democrats 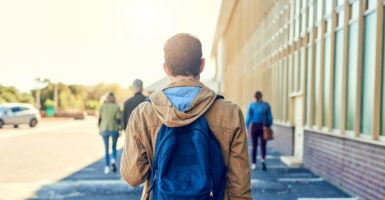 The Aim Higher Act, which is expected to hit the House between July 24 and July 27, would grant states federal funding provided that they reciprocate by granting two years of tuition-free community college to students, The Washington Post reported Tuesday.

“The Aim Higher Act is a serious and comprehensive proposal to give every student the opportunity to earn a debt-free degree or credential,” Virginia Democratic Rep. Robert C. “Bobby” Scott told the Post. “It provides immediate and long-term relief to students and parents struggling with the cost of college, it puts a greater focus on helping students graduate on time with a quality degree that leads to a rewarding career, and it cracks down on predatory for-profit colleges that peddle expensive, low-quality degrees at the expense of students and taxpayers.”

But Sefton Hall University professor Robert Kelchen expressed skepticism when discussing the proposal with the Post.

“Taking away that flexibility would be a nonstarter in many states,” he said, referring to lawmakers’ ability to divert higher education funds to other enterprises where spending is required.

“It may serve as a litmus test for people running for president in 2020,” Kelchen said, referring to both the Democrats’ bill, as well as a Republican bill that attempts to extract the federal government from higher education, as mandated in the Higher Education Act of 1965.

The Republican bill would reduce taxpayer money directed toward higher education by cutting some student aid initiatives. It would also suggest that schools adjust their curriculum to meet employers’ needs.