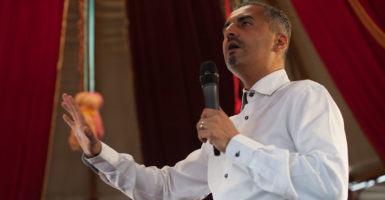 Maajid Nawaz, a British Muslim activist, says the Southern Poverty Law Center is wrongly labeling other organizations as hate groups. Nawaz obtained a $3.4 million settlement from the SPLC for labeling him and his organization as anti-Muslim extremists. (Photo: Justin Ng/Retna/Photoshot/Newscom)

A left-wing organization is wrongly labeling others as “hate groups,” a Muslim leader who works against Islamist terrorists says.

Maajid Nawaz recently settled out of court with the Southern Poverty Law Center for over $3 million after he challenged it for listing his left-of-center group as extremist.

“I want them to understand that something clearly went wrong in the processes here,” Nawaz said Friday on “Fox & Friends.” “If it could have gone wrong for me, which is such a clear case, then there are others.”

Listing Nawaz and his research group, Quilliam, as anti-Muslim extremists cost the Southern Poverty Law Center $3.4 million in a settlement payment paired with a video apology.

In 2016, the SPLC had labeled Quilliam, which markets itself as the “world’s first counter-extremism organization,” as an anti-Muslim hate group for its calls to reform Islam. Nawaz, who is British and a former radical Muslim, moved to sue the SPLC on grounds of defamation.

The matter was settled out of court June 18, with the SPLC agreeing to pay the $3.4 million and issue a public apology.

“I grew up respecting the work of the Southern Poverty Law Center, and their work against the KKK, in particular, was something, somebody like me … grew up appreciating,” Nawaz said in the interview on “Fox & Friends.”

The SPLC has been in the news in recent years for labeling mainstream conservative organizations, including the traditional values group Family Research Council and the Christian legal group Alliance Defending Freedom, as hate groups. They and others say the liberal group does so to those it disagrees with to raise money.

Nawaz, who calls himself a liberal politically, said his inclusion on the SPLC’s list of hate groups was “shocking.”

Labeling someone an anti-Muslim extremist is dangerous because “that’s putting a target on our heads for the jihadists to come and kill us,” he said.

“These are serious allegations that terrorists take very, very seriously, and they go after people like us,” he said.

Nawaz said he told the SPLC that “we agree on more than we disagree when it comes to challenging extremism,” and that he wanted to understand how he had ended up on its list.

Nawaz said he believes that the SPLC’s apology was sincere, and that his inclusion on a list of hate groups was a “genuine mistake.” But, he said, he is “still trying to explore and get to the bottom of this.”