Facebook Removes Death Threats Toward Republicans After Lawmaker Calls It Out 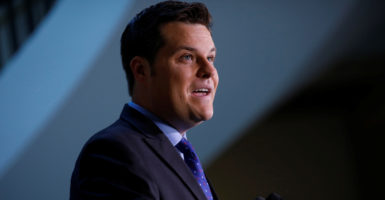 "While I unconditionally support the First Amendment, inciting violence against others due to their political affiliation is not constitutionally-protected speech,” says Rep. Matt Gaetz, pictured in Washington, D.C., on Feb. 2. (Photo: Aaron P. Bernstein/Reuters/Newscom)

Facebook removed a page Tuesday that posted incitements to violence and implied death threats after a Republican lawmaker called the company out.

During a hearing Tuesday with representatives from Facebook, Twitter, and Google, Republican Rep. Matt Gaetz of Florida asked Facebook’s head of global policy management, Monika Bickert, why the social media giant hasn’t removed the page, “Milkshakes against the Republican Party,” for its calls to violence against Republicans.

“Do you remember the shooting at the Republican baseball game? One of those should happen every week,” one post read, referring to the attempted assassination of GOP members, which almost killed House Majority Whip Steve Scalise, R-La. Bickert read the post back to Gaetz at the hearing.

Another post called for “crazed shooters” to target Republicans at baseball practices, saying, “If you really want to be remembered, that’s how you do it,” before referring to the National Rifle Association as a “terrorist organization.”

“Any call to violence violates our terms of service,” Bickert clarified. However, Gaetz claimed Facebook responded to his staff after reporting the page earlier that “it doesn’t go against one of our specific community standards.” Later that day, Facebook removed the page.

“I am glad Facebook swiftly removed this offensive page; while I unconditionally support the First Amendment, inciting violence against others due to their political affiliation is not constitutionally-protected speech,” Gaetz said in a statement, The Hill reported. “While removing this page was a small step forward to making Facebook a safer place, bigger questions remain.”

“They simply cannot have it both ways,” Gaetz said. “My colleagues and I on the Judiciary Committee look forward to exploring this important distinction in the future.”