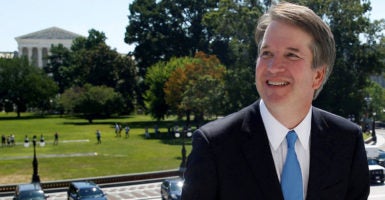 With the Supreme Court building in the background, Judge Brett Kavanaugh arrives July 10 at the Capitol before a meeting with Senate Majority Leader Mitch McConnell. (Photo: Joshua Roberts/Reuters/Newscom)

While serving on the U.S. Circuit Court of Appeals in Washington, D.C., Judge Brett Kavanaugh heard cases touching on religious liberty that could indicate how he could rule on such issues that go before the high court if he’s confirmed.

Kavanaugh also advocated on behalf of religious freedom while in private law practice.

“Overall, he has a solid record on religious freedom issues,” Travis Weber, director of the Center for Religious Liberty at the Family Research Council, told The Daily Signal.

“I’m not sure I would have drafted all of the same language myself for every opinion, but it is clear he understands religious freedom law and how to apply it and that he will protect religious freedom,” said Weber, a lawyer who is also the Family Research Council’s vice president for policy.

But Kavanaugh’s opinions have alarmed some on the left.

The Center for Inquiry, a secularist advocacy group, argues that his joining the Supreme Court would mean more decisions such as the Hobby Lobby ruling. In that decision, the justices upheld the religious freedom of some employers not to be bound by Obamacare requirements that employee health insurance plans cover contraception, sterilization, and abortion-inducing drugs.

The group also accused Kavanaugh, who is Catholic, of supporting “Christian privilege.”

“This nominee represents an extreme view of religious freedom that has no basis in the founding principles of this country,” Nick Little, vice president for Center for Inquiry, said in a public statement, adding: “He will be able to double down on the Hobby Lobby decision and carve out exemptions for religious people from swathes of laws, including the civil rights laws which protect the vulnerable in society.”

Here is a look at four key cases and how Kavanaugh ruled, plus two in which he was a lawyer.

In 2017, the Washington Metropolitan Area Transit Authority—known as Metro and the operator of buses and trains for the D.C. region, including parts of Virginia and Maryland—didn’t accept ads for a campaign by the Archdiocese of Washington.

Metro had adopted a policy in 2015 to ban any ads it deems controversial because of political or religious content. The archdiocese, during the Christmas season, runs an ad campaign called “Find the Perfect Gift” that encourages area residents to participate in spiritual activities and to give to the needy.

In November, the archdiocese sued the transit authority for banning religious speech. The U.S. District Court for the District of Columbia denied a temporary injunction requested by the archdiocese. Upon its appeal to the D.C. Circuit, Kavanaugh weighed in.

The case is pending, but during the oral argument, Kavanaugh called the transit authority’s ban on religious advertising—including Christmas ads—“pure discrimination” and “odious” to the First Amendment.

The nonprofit group Priests for Life sued over the Obamacare mandate requiring employers to cover the cost of contraception and some abortion-inducing drugs—even religion-based organizations that have moral objections.

The D.C. Circuit ruled in in 2015 in favor of the Obama administration, but Kavanaugh disented.

He wrote that it was “crystal clear” that “when the Government forces someone to take an action contrary to his or her sincere religious belief … the Government has substantially burdened the individual’s exercise of religion.”

Some on the right argued the judge didn’t go far enough in arguing more broadly for religious liberty. But the plaintiffs supported his words.

“Judge Kavanaugh understands the importance of religious liberty to all Americans,” Father Frank Pavone, national director of Priests for Life, said in a public statement. “That was clear in his dissenting opinion in our case, Priests for Life vs. HHS, which eventually made it to the Supreme Court. He’s exactly the kind of justice we need on the Supreme Court at this point in time.”

In this 2010 case, Kavanaugh was in the majority for a D.C. Circuit ruling rejecting a challenge by California atheist activist Michael A. Newdow, along with 28 others, to the presidential oath of office.

Newdow sought to prevent the words from being used in future inaugurals.

Newdow sued Chief Justice John Roberts over the phrase “so help me God” after it was used in the 2009 inauguration of President Barack Obama.

Newdow also objected to prayers delivered by the Rev. Rick Warren and the Rev. Joseph Lowery during inaugural ceremonies.

Kavanaugh wrote that “stripping government ceremonies of any references to God or religious expression … would, in effect, ‘establish’ atheism.”

In a commentary for The Daily Signal, Heritage Foundation legal experts Elizabeth Slattery and John Malcolm wrote of the case:

While the majority held that the plaintiffs lacked standing and therefore did not reach the merits of the case, Kavanaugh concurred, stating that he would have reached the merits (which is why he has been criticized by some conservatives) and squarely ruled against the challengers, finding that “both ‘so help me God’ in the presidential oath and the prayers at the Presidential Inauguration do not violate the Establishment Clause.”

In 2010, Kavanaugh joined the D.C. Circuit majority in deciding a free speech case against the National Park Service, an agency within the Interior Department.

The National Park Service stopped a Christian from passing out Gospel tracts at Mount Rushmore, asserting its policy against potentially controversial material.

The case went before the D.C. Circuit because it dealt with a federal agency’s policy.

“The court found the park service’s regulation of free speech was overly broad,” Gary McCaleb, senior counsel for Alliance Defending Freedom, a Christian legal group, told The Daily Signal. “The ruling smacked down the concept of speech zones and struck the right balance between government agencies and religious liberty.”

While in private practice as a lawyer, Kavanaugh argued that a public school that allows after-school use of its facilities by clubs must include religious clubs.

This time, in the case of Good News Club v. Milford Central School, he was on the winning side before the Supreme Court.

The high court ruled 6-3 in 2001 that when government operates a “limited public forum” such as a government building, it is not allowed to discriminate against any speech that takes place in that building.