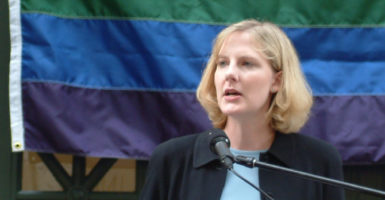 “We write as students, alumni, and faculty proud of our alma mater,” the letter reads. “We join Yale Law School in its praise of distinguished Yale alumnus Judge Brett Kavanaugh.”

While the opponents’ letter was filled with fears over the impact Kavanaugh will have on the law, such as overturning Roe v. Wade, his supporters’ letter is completely void of anything related to policy. Instead, the letter praises his work and they make it clear they’re proud he is a Yale Law alumnus.

“Judge Kavanaugh is eminently qualified to serve as a Supreme Court justice. Judge Kavanaugh, a graduate of Yale College and Yale Law School, is one of our nation’s most distinguished jurists,” the letter added. “In his twelve years of service on the United States Court of Appeals for the D.C. Circuit, he has demonstrated a principled approach to interpreting the law. He has reached legal conclusions free of political partisanship. Judge Kavanaugh has devoted his professional life to upholding the rule of law and our Constitution.”

Other Yale faculty and students wrote and signed an open letter to Yale Law School Dean Heather K. Gerken, demanding she “use [her] authority and platform to expose the stakes of this moment and the threat that Judge Kavanaugh poses.”

Gerken praised Trump’s nomination of Kavanaugh, saying she can “personally attest that, in addition to his government and judicial service, Judge Kavanaugh has been a longtime friend to many of us in the Yale Law School community.”

“I have known Brett Kavanaugh for many years,” Gerken said on Monday. “Ever since I joined the faculty, I have admired him for serving as a teacher and mentor to our students and for hiring a diverse set of clerks, in all respects, during his time on the court.”

“In our deeply polarized climate, these respectful, civil, and entirely accurate comments are a breath of fresh air,” the letter concludes. “Judge Kavanaugh is a distinguished jurist qualified for the highest public service. He should be given the fair, principled, and swift consideration he deserves.”