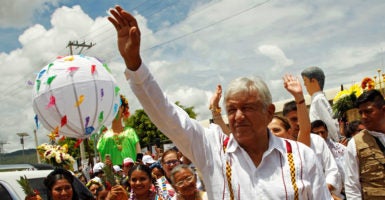 On Sunday, Mexico is set to hold elections for the presidency and roughly 3,000 other federal, state, and local offices.

Not even the politicians running for office are immune from the pervasive violence that has gripped the country.

So far, in this election cycle alone, 130 politicians have been killed and hundreds have been physically attacked since September.

Candidates and elected officials at the local level are the target of most of this violence.

Aaron Varela Martinez, a mayoral candidate in the state of Puebla, was murdered in March. Varela, a candidate for the Morena party, was running on a staunch anti-corruption platform with the slogan, “Not to lie, not to betray, and not to rob.”

While no specific criminal organization is known to be behind all of the murders, the candidates and officials being targeted are often those pledging to end corruption and crime.

The most recent assassination occurred on June 21.

Party of the Democratic Revolution mayoral candidate Fernando Angeles Juarez’s murder occurred with only a week before the general elections.

Angeles ran on a vocal platform against corruption and organized crime. His assassination led to the arrest of the entire police force by federal authorities in the city of Ocampo, Michoacan.

No one has been accused of committing the murder, but federal authorities suspect the city’s police force of colluding with organized crime to carry out the assassination.

The assassination of Mayor Maria Santos Gorrostieta in 2012 made international headlines. Gorrostieta, who represented a city in the crime-ridden state of Michoacán, maintained a hard line against the drug cartels. She survived two assassination attempts, one that killed her husband. In 2012, Gorrostieta was targeted for the third time and was murdered.

Six years later, Gorrostieta’s assailants have yet to be identified.

This sort of corruption remains a major issue at all levels of Mexican government.

The shocking disappearance of 43 students is a horrid case of politicians colluding with a criminal group.

In September of 2014, the students traveled from a rural part of the country to Mexico City for a memorial service, and were intercepted by corrupt police officers who were working for equally corrupt local officials.

Officials then turned the students over to a criminal group who then killed them all and burned their bodies to hide evidence of the murders.

With the fourth anniversary of the students’ disappearance nearing, the case remains unsolved.

With less than a week until election day, the Mexican public continues to stand sharply divided amongst their choice for president, though leftist candidate Andrés Manuel Lopéz Obrador, known as AMLO, is currently leading in the polls.

One thing that unites the country is the shared perception that urgent action is needed to address the out-of-control violence, corruption, and transnational criminal organizations running rampant.

Regardless of who wins, combatting these issues and creating economic opportunities must remain a priority for their administration.