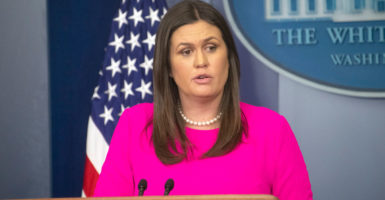 The Red Hen denied service to Sarah Huckabee Sanders precisely because of who she is. They did not refuse to create a custom order that would have endorsed views they disagreed with. They denied her service, period. (Photo: Ron Sachs - CNP / MEGA / Newscom)

After a Lexington, Virginia, restaurant, the Red Hen, refused service to White House press secretary Sarah Huckabee Sanders on Friday, commentators on the left immediately seized upon a false analogy.

They likened that incident to the Masterpiece Cakeshop case, the case of the Christian baker in Colorado who refused to craft a custom cake for a same-sex wedding.

That attempt at an analogy reveals that the left still does not understand the Supreme Court’s ruling in Masterpiece Cakeshop v. Colorado Civil Rights Commission.

Jack Phillips, the baker, serves all customers, but cannot serve all events. He declined to make a wedding cake for a same-sex couple not because of their identity, because he could not communicate a message that violated his religious beliefs.

He even offered the couple any other item in his store.

Meanwhile, the Red Hen denied service to Sanders precisely because of who she is. They did not refuse to create a custom order that would have endorsed views they disagreed with. They denied her service, period.

The false analogy also reveals the hypocrisy of the left’s position. They accuse people like Phillips, who serves everyone regardless of who they are, of discrimination, but herald institutions like the Red Hen for denying service because of who someone is.

Robert P. George, a philosopher and Princeton University McCormick chair of jurisprudence, explained the problem with the analogy in tweets:

2/ serve her on its premises, sell her off the shelf food items that she can use for any event she likes, and provide custom-designed food items for her for birthday parties, holiday celebrations, and other events that Red Hen's owners don't object to on moral grounds.