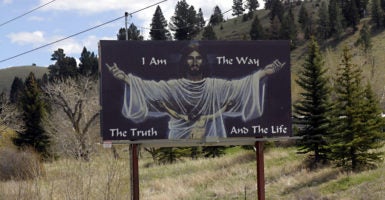 In Texas, you can advertise adult shops—it’s church promotion they find offensive. That’s the unbelievable predicament First Baptist Dallas finds itself in after it tried to buy a billboard for upcoming sermon topics. What’s offensive about a message on the Christian heritage of America? Plenty, according to the Dallas mayor.

Freedom Sunday is June 24 for one of the largest churches in Dallas, but it won’t be easy getting that news to locals. When First Baptist Dallas bought billboard space to promote it, owners of the sign company, Outfront Media, said it was inundated with complaints. “Dallas Morning News and other news affiliates are doing stories on how it’s offensive and bigoted,” said a representative for Outfront. ” … [F]ollowing our lawyer’s advice, we have to take them down ASAP.”

Apparently, the idea that “America is a Christian nation” is not only news to local liberals, but offensive. With the help of the Dallas Morning News, Mayor Mike Rawlings launched a personal campaign to scrub the sign, insisting, “That is not the Christ I follow.”

Reminding people of America’s Christian roots is “not the Dallas I want to be,” Rawlings told the newspaper, “to say things that do not unite us but divide us. I never heard those words—that voice come out of Christ. Just the opposite. I was brought up to believe: Be proud of yours, but do not diminish mine.” First Baptist was stunned. Nothing about America’s heritage should be controversial.

To appease the mayor, the church offered to add a question mark at the end: “America is a Christian nation?” But, as Fox News’s Todd Starnes points out, that—too—was rejected.

“We were told that the title was ‘anger-provoking’ rather than ‘thought provoking,'” the pastor told Starnes. And that should set off alarm bells for every churchgoer. “It should greatly concern people of any faith when those in the press or government proactively seek to defeat, censor, or silence any religious message with which they disagree,” he said.

The incident not only reveals the religious bigotry of the Dallas Morning News, but its shortsightedness. Newspapers, after all, operate from the same First Amendment as churches. The freedom of the press and religion are inextricably linked, and no one—least of all the media—should be clamoring for the censorship of either. It’s not only hypocritical but a slippery slope.

Although First Baptist Dallas recognizes the right of the company to turn down the business, church leaders say they won’t be “deterred.” They plan on doing whatever they can to “defend the foundational values of our country.”