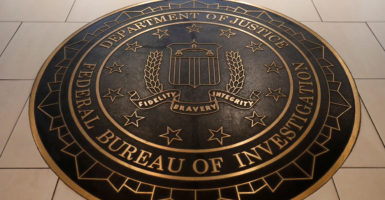 The FBI seal is seen at FBI headquarters in Washington on June 14, the day of the release of a scathing government audit of the bureau. (Photo: Yuri Gripas/Reuters/Newscom)

“We will separately report on those investigations as they are concluded,” @JusticeOIG says.

The Justice Department’s Office of Inspector General noted that “dozens” of FBI agents had contact with the news media, and many were taking sports tickets, golf outings, and other gifts from reporters to whom they were leaking unauthorized information about a criminal investigation.

The FBI’s Office of Integrity and Compliance discourages the acceptance by agents of anything of value, said Ron Hosko, a former FBI assistant director.

“Accepting something from someone who clearly expects something back has the whiff of a quid pro quo,” Hosko told The Daily Signal.

“Any agreement for something of value in exchange for information—particularly, information related to an investigation—would constitute a corrupt relationship and warrants the strongest sanction,” he added.

We have profound concerns about the volume and extent of unauthorized media contacts by FBI personnel that we have uncovered during our review.

In addition, we identified instances where FBI employees improperly received benefits from reporters, including tickets to sporting events, golfing outings, drinks and meals, and admittance to nonpublic social events.

We will separately report on those investigations as they are concluded, consistent with the Inspector General Act, other applicable federal statutes, and OIG policy.

The report goes on to recommend that “the FBI evaluate whether (a) it is sufficiently educating its employees about both its media contact policy and the Department’s ethics rules, and (b) its disciplinary penalties are sufficient to deter such improper conduct.”

The Office of Government Ethics describes specific restrictions on executive branch employees accepting gifts. A “prohibited source” of a gift is “seeking official action” or “has an interest.”

The question arises if and when that affects a news organization with an interest in information held by a government employee who is taking gifts, potentially using that job for personal gain.

“We are looking at two potential crimes. One is potential disclosure of classified information. The second is potential bribery,” Curt Levey, president of the Committee for Justice, a nonprofit conservative legal group, told The Daily Signal. “Under bribery statutes, the Supreme Court has determined you have to prove a quid pro quo.”

That would be a difficult case to prosecute, because bribery is often thought of in the context of giving a government official “cash or a Rolex,” said David Rivkin, a lawyer who served in the White House Counsel’s Office under President George H.W. Bush.

“If an FBI agent received meals and benefits in exchange for providing this information, it might fall under the bribery statute,” Rivkin told The Daily Signal. “You might convince a grand jury, but can you convince a jury?”

Rivkin said another potential offense would be FBI agents misusing government property or the authority of their office to advance a purely personal agenda.

FBI officials Peter Strzok and Lisa Page were the only named individuals, while others were identified only as FBI employees or agents.

“I found the totality of the messages, not just Strzok and Page, but ‘Agents 3 and 4,’ absolutely appalling,” Rivkin said. “I have never seen anything like this in my years at the Department of Justice.”

“FBI Employee 3” responded, “As I have initiated the destruction of the republic … Would you be so kind as to have a coffee with me this afternoon?”

“FBI Employee 4” chimed in, “I’m clinging to small pockets of happiness in the dark time of the Republic’s destruction.”

“FBI Attorney 2” wrote, “I am so stressed about what I could have done differently,” adding, “I don’t know. We broke the momentum.”

As a reassurance, “FBI Employee” wrote, “All the people who were initially voting for her would not, and were not, swayed by any decision the FBI put out. Trump’s supporters are all poor to middle class, uneducated, lazy POS that think he will magically grant them jobs for doing nothing.” (“POS” is an acronym for a barnyard epithet.)

“They probably didn’t watch the debates, aren’t fully educated on his policies, and are stupidly wrapped up in his unmerited enthusiasm,” the message continued.

What upset Rivkin the most about the messages was that no FBI employees seemed to object.

“If you looked at all the people involved in those chains of messages with disdain and anger, you don’t see any Boy Scouts,” Rivkin said. “That’s very depressing to me.”