How Faith Communities Can Push Back the Darkness of Suicide 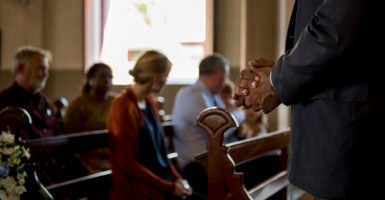 Some recent celebrity suicides have sparked much discussion about depression and mental illness. There was, however, little talk of spiritual health.

That’s unfortunate. Even as the suicide rate rises, a growing body of research testifies to a positive relationship between faith and mental health. The help so many need may be as close as the nearest house of worship.

Aaron Kheriaty, author of “Dying of Despair,” argues that rising suicide rates and many other societal ills can be traced to increased social fragmentation. He concurs with a former U.S. surgeon general’s analysis that “social isolation is a major public health crisis, on par with heart disease or cancer.”

Similarly, Nobel Prize winner Angus Deaton and Princeton University economist Anne Case concluded that the rise in “deaths of despair” is a “failure of spiritual and social life.”

Social fragmentation can damage our emotional and mental health, but faith—and faith communities—can be a powerful force for connectedness, for nurturing a sense of belonging. As John Stonestreet of the Colson Center has observed, “One of the characteristics of regular churchgoing is that it increases social ties and strengthens already existing ones.”

Yet faith and fellowship is receding from the daily lives of a growing number of Americans. Weekly church attendance has dropped by almost a third among Americans with a high school diploma or less.

While career success is often depicted as climbing a ladder, personal success may be envisioned as building a web of healthy relationships, each adding spiritual, emotional, and mental strength. Few people are better situated to help build these relationships than local religious leaders.

Faith-based counselling has some inherent advantages. Many people resist seeking medical treatment for depression due to the lingering stigma attached to mental illness. They may feel far more comfortable seeking understanding and compassion in a house of worship rather than a medical facility to discuss what’s troubling them.

A sense of the transcendent may also serve as a final barrier against the fear of life overcoming the fear of death. When country music legend Johnny Cash bottomed out in his struggle against drug addiction, he crawled into a cave to die. There, he had a spiritual awakening that drew him back from the brink.

Even cultural and political leaders who are not devout would be wise to recognize the power of spirituality to encourage the struggling and build their support networks. A mother who lost her son to depression, addiction, and suicide recently wrote: “Connection and love are probably the most important component to healing our culture. Who better to lead that change than our faith leaders and houses of worship?”

The more distant we grow from one another, the more likely we are to break down, mentally, emotionally, psychologically, and physically. We should not underestimate our need for one another and the power of faith to give the vulnerable hope to face their struggles.