Census Bureau Has Been Co-Opted by Leftist Ideologues 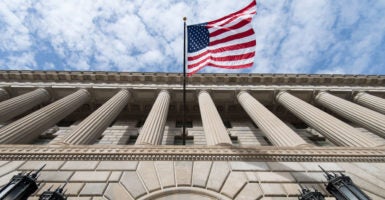 Members of the Census Bureau's National Advisory Committee on Racial, Ethnic, and Other Populations are resisting the Trump administration's citizenship question for the 2020 census. (Photo: Bill Clark/CQ Roll Call/Newscom)

“Are you an American or not?”

It’s a simple question, one that every U.S. census should include, especially when the survey already contains nonsensical and intrusive inquiries into one’s ethnic DNA composition and whether one co-habits with someone of the opposite sex or one’s own.

Whether you are a citizen or not is a valid question in a civic-minded constitutional democracy. Whether your parents are ethnic Chinese born in Peru or you are a nonpracticing heterosexual, not so much.

And yet, the inclusion of a citizenship question and other changes rightly being made by the Trump administration to the 2020 census caused a lamentably predictable furor on Thursday, at the first day of the spring 2018 meeting of the Census Bureau’s National Advisory Committee on Racial, Ethnic, and Other Populations.

If anything, it was a case study in how the relationship between the bureau and its outside advisers has become dysfunctional.

From the start, nearly all the advisory committee’s members bitterly protested the changes, while bureaucrats implored them not to let their frustration prevent them from sending “community organizers” to help publicize the enumeration in two years’ time.

Both sides are wrong. The vast majority of the committee members hail from leftist ethnic special-interest groups or from equally leftist faculty lounges. They don’t have a leg to stand on regarding the changes being sought by an administration elected by the American people.

The bureau, meanwhile, should not be seeking the help of “community organizers”—of all people—on something that should be bipartisan and so elementary to our democracy.

The squabbling began near the start of the meeting, when advisory committee Chair Ditas Katague asked every member of the panel to briefly mention the two things uppermost on their minds. It quickly became clear that three issues rose to the top.

By order of importance, what most troubles the committee members are: 1) the citizenship question; 2) the administration’s refusal to combine ethnic and racial questions (which would effectively put the artificial Hispanic category on the same footing as races recognized by anthropologists and biologists); and 3) the administration’s refusal to create yet another synthetic category, this one for Middle East and North Africa.

The last two were proposals made by the Obama administration two months before the 2016 election, which a Hillary Clinton administration was clearly expected to rubber-stamp. Then the election happened.

While all committee members went out of their way to display despondency, and threaten Census Bureau officials in attendance with withdrawing support from the 2020 census, by far the most melancholy was Arturo Vargas, executive director of the National Association of Latino Elected Officials (NALEO).

“History is watching,” he implored theatrically at one point.

Barely hidden was their displeasure that most Census Bureau leaders are declining to criticize the administration on the three points of contention.

When Census Bureau Associate Director Enrique Lamas patiently pointed out that, since 2005, some 42 million American households have answered the American Community Survey, a smaller census product that contains the citizenship question, and there hasn’t been a hitch, Vargas shot back that to “equate the ACS with the decennial census undermines the intellectual honesty of the bureau.”

But why? Critics of the question charge that inclusion of the citizenship question will erode responses from immigrants, but they don’t have a single study that shows that.

At most, they have a report on focus groups, which includes the warning that the report is based on “small, qualitative, non-representative samples.”

The 42 million households who have answered the survey amounts “to a much larger test than any focus group,” Lamas pointed out.

But the Census Bureau still wants the NALEO and other large ethnic pressure groups represented on the advisory committee—such as the Mexican American Legal Defense and Educational Fund (MALDEF) and Asian Americans Advancing Justice (AAAJ)—to help with the survey.

“I hope you will support us, because you are trusted voices in your communities,” implored Tim Olson, another Census Bureau associate director.

But this is based on the mistaken belief that these groups speak for the “grass roots” and are even in touch with them. They are beholden to corporations, governments, and foundations for all of their funds, not to members.

For example, on perhaps the biggest issue affecting Chinese-Americans and Indian-Americans at the moment—the discrimination they experience in admissions to selective universities and schools because of the racial preferences known as “affirmative action”—AAAJ sides with the schools, and against these Asian-Americans.

AAAJ and the MALDEF are, meanwhile, both suing the administration over the citizenship question. Some partners.

Katague at one point warned that these race-based organizations may not be able “to put their reputations on the line” by supporting the census in 2020. It’s a proposition the Census Bureau ought to consider and say, “Here’s your hat, what’s your hurry?”