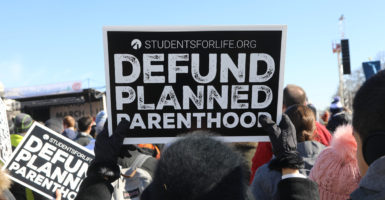 Students for Life of America, which aims to abolish abortion on college campuses, says it can't get the ear of Cal State. (Photo: The Heritage Foundation)

A pro-life group has sought without success to speak with California State University at Long Beach about its stance on an abortion bill that soon may take effect at all California public universities.

Students for Life of America, which aims to abolish abortion on college campuses, launched a #RUSerious campaign to protest a proposal to give out the RU-486 abortion drug for free in campus health centers across California.

The group reached out to the Cal State chancellor’s office on many occasions to speak about the proposal, but those requests have been ignored, said Camille Rodriguez, the group’s Pacific Southwest regional coordinator.

“As a resident and taxpayer in California, it is incredibly offensive to democratic ideals that myself and my students, many of whom are also residents and taxpayers of California, cannot have a discussion with the school system that is supposed to serve us,” Rodriguez said, according to a Tuesday press release.

Rodriguez maintains that she and her students called five separate times in March and April and left messages asking to discuss Senate Bill 320, but that none of those calls was returned.

Cal State students, as well as students from other California universities, gathered May 22 to demand the state Assembly accept and pass SB 320. The California Senate on Jan. 29 approved the bill, which would require the state’s public universities and colleges to offer abortion drugs at their health centers.

If signed into law, the bill would take effect in 2020.

California State University did not respond to The Daily Caller News Foundation’s request for comment.