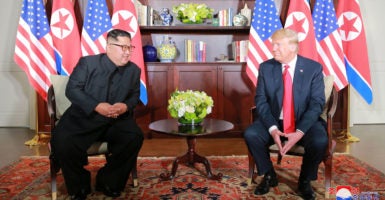 "Got along great with Kim Jong Un who wants to see wonderful things for his country. As I said earlier today: Anyone can make war, but only the most courageous can make peace!" tweeted President Trump. (Photo: KCNA/Reuters/Newscom)

The joint statement from President Donald Trump and North Korean dictator Kim Jong Un on Tuesday after their summit in Singapore produced hope for a denuclearization deal, but also some concern over what it didn’t mention.

“We will be stopping the war games, which will save us a tremendous amount of money,” @RealDonaldTrump says.

Human rights and U.S. military forces in South Korea were not directly addressed in the document, which focused primarily on North Korea’s denuclearization and provided “security guarantees” from the United States—the latter meaning the U.S. would not seek regime change in the Northeast Asian nation.

Trump, however, did stir concerns with talk about joint U.S.-South Korean military exercises, saying after the meeting, “We will be stopping the war games, which will save us a tremendous amount of money.”

The fear of the loss of U.S. protection has concerned South Korea and other Asian allies, and shouldn’t be a target for cost savings, said Jamil Jaffer, former chief counsel to the Senate Foreign Relations Committee and former senior counsel to the House intelligence committee.

He said trading of denuclearization in North Korea for fewer U.S. troops in South Korea is similar to past proposed deals that didn’t work out.

“He brought North Korea to the table because he demonstrated that we have power, and if they want to pick a fight, then we will win,” Jaffer, founder of the National Security Institute at George Mason University, told The Daily Signal. “We went from Donald Trump as Ronald Reagan to Donald Trump as Barack Obama.”

Jaffer is concerned that Trump is offering upfront concessions similar to those of the Obama administration in the Iran nuclear deal.

Some of the military exercises, or “war games,” involve 20,000 U.S. military personnel in South Korea, but there are also smaller exercises.

Suspending or eliminating all of them would hinder preparedness, said Thomas Spoehr, director of the Center for National Defense at The Heritage Foundation.

“The suspension of the large joint exercises for an extended period of time, particularly for more than six months, could be expected to erode the readiness of U.S. and South Korean forces to successfully work together to defend South Korea,” Spoehr, a retired Army three-star general,  wrote in a commentary for The Daily Signal.

“If the term ‘war games’ is applied more expansively and encompasses lower-level exercises, the negative impact on readiness will be more immediate and severe,” he added.

The talk of suspending military exercises is worrisome, but could be a larger negotiating point, said Lester Munson, former staff director for the Senate Foreign Relations Committee.

“If the military exercises are part of a comprehensive package that is well thought out and definitely in our interest, that’s great,” he told The Daily Signal. “If not, that’s not so good. But, this could give Kim Jong Un something to take back home and say he has credibly made a deal, as long as there is a next step.”

The joint statement at this stage “is basically a press release,” Munson said.

Secretary of State Mike Pompeo and national security adviser John Bolton will be working with their North Korean counterparts to hammer out details.

Pompeo has said he will seek authorization from the Senate. That would reassure the Kim regime that a future president could not as easily undo the agreement as Trump has unraveled Obama’s Iran nuclear deal. While a president could unilaterally undo a Senate-approved treaty, it would be politically difficult both on the domestic and international front.

To get the 67-vote Senate supermajority to ratify a treaty, Trump should have to compel Kim to address human rights abuses in his country, said Munson, who predicted a final agreement is likely 12 to 18 months away.

“There is no way to provide a security guarantee without addressing human rights,” he said. “This has to be addressed in its totality if it’s going to get through the Senate.”

The needed bipartisan buy-in for approving the treaty would likely be helped by the fact the Senate won’t be voting on it during an election year, he said.

“The Senate is very partisan now, and Senate Democrats are not inclined to support any Trump policy,” Munson said. “But if this final agreement is complete, verifiable, irreversible, dismantlement of [Kim’s] nuclear program, and addresses human rights, it could be tough to vote against.”

…Got along great with Kim Jong-un who wants to see wonderful things for his country. As I said earlier today: Anyone can make war, but only the most courageous can make peace! #SingaporeSummit