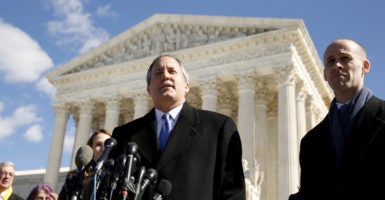 Twenty states have come out against the Waters of the United States rule and are pushing the EPA to finish reviewing and rescinding it quickly. Pictured : Texas Attorney General Ken Paxton. (Photo: Kevin Lamarque/Reuters /Newscom)

The wave of injunctions issued Friday by U.S. District Court Judge Lisa Godbey Wood of Georgia’s Southern District, symbolizes growing opposition to the rule, Politico reported. A federal judge in North Dakota had exempted 13 other states from the rule in 2015 after it was finalized.

“The WOTUS rules are a blatant power grab by the EPA,” Texas Attorney General Ken Paxton, a Republican, said in a June 2017 statement. “The federal government exceeded its statutory authority by attempting to regulate areas that Congress never intended to be under federal jurisdiction, and directly infringed on the states’ ability to regulate their own natural resources.”

Georgia, Alabama, Florida, Indiana, Kansas, North Carolina, South Carolina, Utah, West Virginia, Wisconsin, and Kentucky are all covered under Godbey’s ruling. An injunction to cover the entire nation has been filed in a federal court in Texas, Politico reported.

The rule gives expansive power to the federal government to regulate development and commerce that happens around bodies of water in the U.S. Although the law loosely refers “navigable waters,” it has been used to justify regulatory action around small, temporary bodies of water.

The Trump administration announced on June 27, 2017, that it would begin repealing the Obama-era rule, promising to “return power to the states and provide regulatory certainty to our nation’s farmers and businesses,” Environmental Protection Agency Administrator Scott Pruitt said.

Friday’s ruling has little immediate impact. The Trump administration delayed the rule’s implementation until 2020, but environmental groups have filed lawsuits to put the rule back in effect, according to Politico.

Twenty states opposed to the Waters of the United States rule are pushing the EPA to finish reviewing and rescinding the rule quickly.