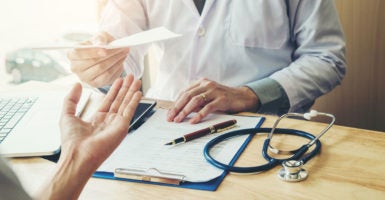 A recent study by the Center for American Progress predicts average annual Obamacare premiums will rise by more than $1,013 next year as a result of recent actions by Congress and the Trump administration.

CAP blames two public policies for the increase: repeal of the tax penalty on the uninsured, and a Trump administration regulation that proposes to permit the sale and renewal of short-term, limited-duration policies.

These policy changes are “acts of marketplace sabotage … [that] have weakened the individual market risk pool and have increased marketplace premiums,” the study’s authors wrote.

But the study rests on shaky assumptions. Its estimates of the effects of both the repeal of the individual mandate penalty and the availability of short-term policies diverge from estimates released by the Congressional Budget Office after the study’s publication.

This is not a matter of technical flaws with the research. The study’s suggestion that recent consumer-friendly policy changes are responsible for high Obamacare premiums misses the mark.

Market turbulence has been a hallmark of Obamacare since its inception. The law’s failed policies caused premiums to double between 2013 and 2017, when the individual mandate was in effect. Enrollment declines were very much in evidence in 2017, the year the Obama administration’s restrictions on short-term policies took effect.

The CAP study also overlooks the benefits of these policy changes. Millions of uninsured individuals no longer will have to worry about IRS tax penalties. Millions more will benefit from much lower premiums thanks to the availability of short-term policies. And both the CBO and critics of short-term policies concede that many people who otherwise would have been uninsured will gain coverage because of the new rule.

1. CAP’s study analyzes premiums for “benchmark” plans to cast the reforms in the worst possible light.

This is a critical detail for several reasons. First, most people who enroll in such plans are eligible for premium subsidies. When premiums rise, so do subsidies, which means enrollees in benchmark plans will be largely shielded from any premium increases.

Second, premiums for benchmark plans tend to be much higher than for other Affordable Care Act-compliant products sold on and off the exchange. For example, the average premium for a 40-year-old for bronze coverage in 2018 is just under $4,100, compared with nearly $5,800 for a silver plan. The dollar increase associated with a 10 percent hike in bronze plans premiums thus would be considerably less than for a 10 percent increase in silver plan premiums.

Third, although the CBO does not provide a specific estimate of non-benchmark premiums, it does project the rate of premium increases for bronze plans will be “slightly slower” than for benchmark silver plans and gold plan premiums would rise at a lesser rate than silver and bronze premiums. The study thus inflates the premium effect of individual mandate repeal on unsubsidized enrollees by using both a higher base premium and a higher rate of increase than the CBO projects.

The CAP study estimates that, on average, premiums for benchmark silver plans will rise by 16.4 percent in 2019 because of mandate repeal and the removal of Obama-era restrictions on short-term policies. As we have seen, they ascribe a 10 percent premium increase to mandate repeal, with the rest attributed to the change in short-term, limited-duration policy rules.

The CBO, by contrast, estimates that this shift would be smaller and more gradual. In 2023, according to the CBO, roughly 1.3 million people would switch from ACA-compliant coverage to short-term policies. That would result in premium increases of 2 to 3 percent in 2023 and subsequent years, less than half the CAP estimate for 2019.

In addition to overstating the effects on 2019 premiums for unsubsidized enrollees, the CAP study overlooks that millions will benefit from repeal of the individual mandate and broader availability and renewability of short-term policies.

First, those who purchase short-term, limited-duration policies will pay lower premiums than they would if they bought plans compliant with the Affordable Care Act. The Centers for Medicare and Medicaid Services found that premiums on short-term polices in 2013 were less than a third of those for Obamacare policies. The CAP study neglects to mention this, which leaves the impression the only effect of the rule change would be higher premiums.

Finally, repeal of the individual mandate will relieve millions of people from the threat of IRS tax penalties. Obamacare proponents promised the law would offer consumers good coverage at low prices and choices among multiple insurance options, ushering in a large and vibrant individual market. Instead, premiums are high, cost-sharing is burdensome, networks are narrow, choices are constrained as insurers have fled the markets, and the individual market is contracting.

Government broke its promises to consumers. It should not punish those who make rational decisions not to buy coverage that costs too much and covers too little.

The premium effects of individual mandate repeal and new rules governing short-term insurance are smaller and more varied than the CAP study suggests. Some people will see premiums somewhat higher than they otherwise would be, but others will pay less for insurance. Some may drop coverage once the government stops imposing tax penalties on the uninsured, but others who would be uninsured otherwise will gain coverage through the short-term policies.

The CAP study overstates the premium increases associated with recently adopted policies and overlooks the benefit.