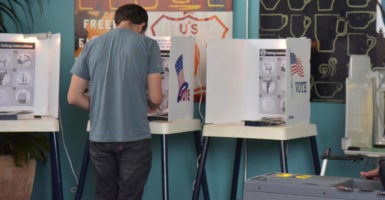 The 1993 National Voter Registration Act requires all states to adopt policies providing for the removal of ineligible voters from state rolls.(Photo: Francisco Lozano/CrowdSpark/Newscom)

A five-justice majority of the U.S. Supreme Court upheld Ohio’s voter purge system, finding the process by which the state removes inactive voters from the rolls does not violate federal law.

Although critics of Ohio’s practice charge the state’s true purpose is the removal of left-leaning voters from the registry, the high court found the process is consistent with federal law.

“Today’s decision is a victory for election integrity, and a defeat for those who use the federal court system to make election law across the country,” Ohio Secretary of State Jon Husted said. “This decision is validation of Ohio’s efforts to clean up the voter rolls and now with the blessing nation’s highest court, it can serve as a model for other states to use.”

Ohio’s maintenance process is fairly straightforward. Voters who do not cast a ballot during a full federal election cycle (which runs two years) are sent a mailer confirming they are still residents of Ohio who wish to remain registered voters. If the mailer is not returned, and if the individual does not vote for the next four years, they are removed from state rolls.

The 1993 National Voter Registration Act requires all states to adopt policies providing for the removal of ineligible voters from state rolls. In his opinion for the court, Alito claimed 24 million voter registrations are currently “invalid or significantly inaccurate,” according to a 2012 study from the Pew Center on the States. However, the National Voter Registration Act forbids removal “by reason of the person’s failure to vote.”

Civil rights and good government groups challenged the Ohio procedure, arguing it targets and prunes voters on the basis of their inactivity. Nonvoting, the challengers point out, is used twice by the state’s process: once as the trigger for the mailer, and again as a condition for final removal. But Alito explained that the National Voter Registration Act only prohibits the use of nonvoting as the sole cause for deregistration.

“We reject this argument because the Failure-to-Vote Clause, as originally enacted in the NVRA … simply forbids the use of nonvoting as the sole criterion for removing a registrant, and Ohio does not use it that way,” he wrote.

Sotomayor wrote her own dissent connecting Ohio’s procedure to “concerted state efforts to prevent minorities from voting and to undermine the efficacy of their votes,” which the National Voter Registration Act sought to curtail. Progressive organizers hit a similar tenor speaking after the ruling.

“Countless voters, including homeless and housing-insecure Ohioans, have already been stripped of their rights as a result of Ohio’s unjust and illogical purge process,” said Chris Knestrick, executive director of the Northeast Ohio Coalition for the Homeless. “By green-lighting Ohio’s purge process, the court allowed states to shut out the voices of these voters.”

Defenders of the process say it ensures the states maintain accurate voter rolls, which are not often updated to reflect forms of attrition like death or relocation. Opponents charge it is yet another iteration of GOP voter-suppression tactics, particularly because nonvoting is a poor proxy change in residence.

The civil rights groups challenging Ohio’s policy seized on this point, citing another provision of the National Voter Registration Act that permits states to use U.S. Postal Service data when sending confirmation mailers of the sort Ohio uses. This, the plaintiffs said, indicates that states may only use data points with a high degree of correlation to relocation as a trigger for the mailer, like USPS information or tax records.

But Alito rejected that arguments as well, stressing that their role was not to scrutinize the good faith policy judgements of Ohio’s state Legislature.

“What matters for present purposes is not whether the Ohio legislature overestimated the correlation between nonvoting and moving or whether it reached a wise policy judgment about when return cards should be sent,” he wrote. “For us, all that matters is that no provision of the NVRA prohibits the legislature from implementing that judgment.”

Some 30 states filed amicus (or “friend of the court”) briefs in the dispute. A coalition of 12 Democratic states filed a brief arguing Ohio’s practices were unlawful, while 17 Republican states urged the high court to uphold them.