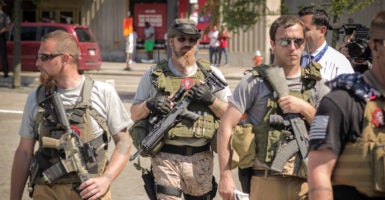 The National Rifle Association announced Thursday that it will challenge Oregon’s petition to ban assault weapons.

Although Initiative Petition 43 has not yet been passed, the NRA released a press release disclosing the organization’s joint challenge with the Oregon Hunters Association.

The petition was filed on March 22, 2018, by a Portland interfaith group, Lift Every Voice Oregon.

In addition to prohibiting possession, the petition would ban manufacturing, selling, transferring, or importing assault weapons. Breaking this law would constitute a felony, reports the Statesman Journal.

“Banning the most popular style of semi-automatic firearms and standard capacity magazines is a violation of the Second Amendment,” said the executive director of NRA’s Institute for Legislative Action, Chris Cox, in the press release. “Misleading voters into believing that these type of bans will have any effect on violent criminals is reckless and dangerous. Proposals like these give criminals the upper hand against law-abiding gun owners.”

Linn County Sheriff Bruce Riley also expressed his discontent with the initiative, calling it “a ‘feel good’ law that won’t make the schools or malls or churches any safer,” according to KVAL-TV.