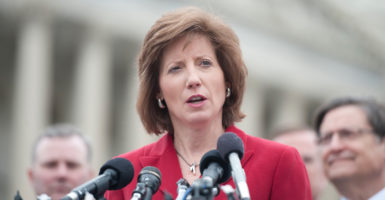 A group of 56 lawmakers led by Rep. Vicky Hartzler, R-Mo., is urging federal officials to investigate the extent to which Planned Parenthood fails to report suspected sexual abuse of minors.

In a letter Thursday to the Department of Health and Human Services, Hartzler and 55 other Republicans ask the agency to probe whether Planned Parenthood, as a recipient of federal Title X funds, “failed in its duty to report suspected child abuse to local authorities and to HHS.”

Hartzler and other signers announced the formal request of an investigation in a press conference Thursday morning at the Capitol.

Among the signers are two senators—Joni Ernst of Iowa and James Lankford of Oklahoma. Besides Hartzler, the 53 members of the House requesting the probe include Chris Smith of New Jersey, Mark Walker of North Carolina, and Diane Black of Tennessee.

The Daily Signal previously reported that the Live Action study, “Aiding Abusers: Planned Parenthood’s Cover-Up of Child Sexual Abuse,” alleges that Planned Parenthood has been caught on multiple occasions providing abortions to victims of sexual abuse as young as 12 and 13, failing to report suspected sexual abuse to authorities, and sending victims back to their abusers.

The report singles out situations where it says abusers forced minors to get an abortion because they had become pregnant after rape and sexual abuse, while Planned Parenthood looked the other way.

In their letter, the lawmakers ask that Health and Human Services specifically investigate and make available:

All records (including from regional offices) regarding any and all incidents of Planned Parenthood Title X recipients’ failure to report suspected sexual abuse of minors in their care;

A record of the steps taken to bring the recipient into compliance each time it was discovered that a Planned Parenthood Title X recipient failed to report suspected abuse, and documentation of the consequences for each recipient that refused to come into compliance; and

Data from Planned Parenthood Title X facilities for the past 10 years showing in the aggregate how many children below their particular states’ age of consent received services that would indicate they were sexually active … as well as the number of reports of suspected child sexual abuse Planned Parenthood made to law enforcement during that same period.

Although a spokeswoman for Planned Parenthood declined to comment on the lawmakers’ letter, she referred The Daily Signal to background materials in which media and other critics characterize Live Action’s video report as deceptive, heavily edited, and untrue.

President Donald Trump’s administration released text May 22 for a proposed rule that would force abortion providers such as Planned Parenthood to choose between federal funding and performing abortions under the same roof as other programs.

Conservative lawmakers have sought unsuccessfully to end taxpayer funding of Planned Parenthood. The abortion giant, which received a total of $543.7 million in taxpayer dollars in 2016, contends that none of that money goes toward abortions.

Hartzler and the other signers of the letter to Azar write that Planned Parenthood receives about $60 million a year in Title X funds from taxpayers. It is the country’s largest recipient of the federal family planning funds, they say, and should not be aiding perpetrators of sexual abuse.

“In light of this [Live Action] report and the influx of federal resources to this organization,” the lawmakers write, “we respectfully request that you investigate Planned Parenthood, as well as other current Title X recipients, to determine how widespread the failure of abuse reporting is.”

In an email Thursday night to The Daily Signal, HHS spokeswoman Caitlin Oakley wrote: “We have received the letter and will respond.”

Here is the full text of the letter and the names of those who signed it: