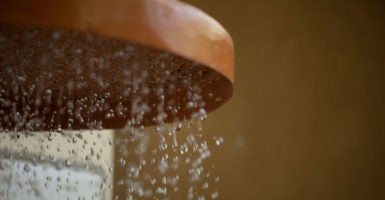 California has turned to water restriction to solve its drought problem. However, this won't fix the underlying issue of recurring droughts. (Photo: Ingram Publishing/Newscom)

California suffers from droughts, but the state’s government is an endless well of bad ideas.

California citizens will be limited to using 55 gallons of water a day now and just 50 per day by 2030.

According to the San Jose  Mercury News, the new laws will “require cities, water districts and large agricultural water districts to set strict annual water budgets, face fines of $1,000 per day if they don’t meet them, and $10,000 a day during drought emergencies.”

As some have noted, the restriction could make it difficult for some California citizens to do laundry and take a shower on the same day without going over the limit.

A Snopes fact check said that this fine is placed on the water provider, not the consumer as some have claimed. This misses the fact that the cost of the fines likely will be passed on to the customer, either directly for violations, indirectly through increased cost of water, or worse, by threatening to shut off household water consumption to avoid fines.

Even some left-leaning outlets admitted the impact on consumers is unknown and the 55-gallon limit is much lower than the average summer usage for the typical Californian. Taking a shower and doing laundry could exceed that amount for some.

According to The Sacramento Bee, the State Water Resources Control Board estimates California residents used an average of 90 gallons of indoor and outdoor water per day in 2017, down from 109 gallons in 2013.

Californians will pay for this law one way or another, making it just a little harder for the middle class to thrive.

The problem also threatens the state’s enormous and important agricultural industry, which is where most of the state’s water goes.

In addition to this legislation, the state is also considering a new tax on drinking water to pay for new infrastructure projects.

The question is: Are these kinds of laws necessary?

Regardless of how punitive the water usage laws end up being, debate over the details obscures the fact California is always quick to crack down on the individual behavior of citizens with obnoxious regulations before it works to efficiently manage its resources.

Instead of promoting efficient, pro-growth policies, state leaders are in thrall to environmentalist ideology and utopian spending schemes that have created poverty and, yes, economic inequality, even as the state goes through an economic boom.

>>> The Changes That Made California Become a Liberal Fiasco

That California, the richest state in the union and one which in no way suffers for lack of tax revenue, cannot find a way to manage its water resources without cracking down with burdensome regulation is telling.

Droughts are nothing new in California, especially in the desert south, but the increasing inability to deal with them is.

California wastes enormous sums of money on a bullet train to nowhere and other excessive spending priorities, but it has neglected to strengthen its water management infrastructure, leaving it susceptible to shortages and rationing.

As Joel Kotkin, fellow in urban studies at Chapman University, explained in a 2015 interview with Reason, the problem goes beyond water.

“The water situation in California is pretty bad,” he said. “You have to understand that we haven’t built any new infrastructure for the last 20 years. This, by the way, is not unique to water. It’s roads, it’s schools, it’s an unwillingness to invest in the future because we spend all our money in government paying the pensions of employees.”

And through this crisis, California has spent enormous resources to protect the delta smelt, a 3-inch fish that appears to be going extinct despite enormously wasteful environmental projects.

“To protect smelt from water pumps, government regulators have flushed 1.4 trillion gallons of water into the San Francisco Bay since 2008,” according to a 2015 report in The Wall Street Journal. “That would have been enough to sustain 6.4 million Californians for six years. Yet a survey of young adult smelt in the Sacramento-San Joaquin River Delta last fall yielded just eight fish, the lowest level since 1967.”

California must find a way to deal with its water shortages. The state may be recovering from a drought, but more are sure to come.

Instead of nickel-and-diming taxpayers and creating onerous restrictions, the state should focus on getting its finances in order and prioritizing basic infrastructure needs over fruitless left-wing welfare schemes.