Remembering the Men Who Fought and Bled on D-Day 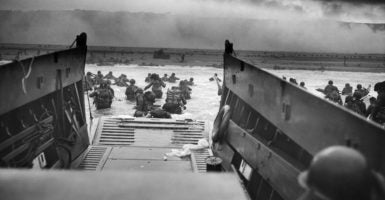 June 6 marks the 74th anniversary of the Battle of Normandy, Operation Overlord, D-Day.

As new generations begin to emerge and the honorable men and women of the Greatest Generation continue to enter history, the memory of D-Day threatens to be lost to time.

Preserving its place in history is important for honoring those who served our country in the past, but also as a reminder to honor those who continue to serve our country today.

Operation Overlord, under the command of Gen. Dwight Eisenhower, proved to be a pivotal moment in World War II and led eventually to the liberation of France and provided a leverage point for an Allied advance upon Adolf Hitler himself.

Some 14,000 paratroopers infiltrated and sabotaged the German defenses from behind, and naval bombardment by the USS Arkansas, USS Nevada, and USS Texas softened the defenses from the front.

Under the command of Gen. Omar Bradley, Utah Beach was stormed by the U.S. VII Corps in three waves. By the end of the day, Utah was secured, with casualties amounting to 197 from the assault and 2,500 paratroopers. But the assault on Omaha Beach proved a far greater challenge.

Critical for the German defense, Omaha demonstrated a formidability unlike its neighbor. The U.S. V Corps, led by Gen. Leonard Gerow, faced elevated terrain and a variety of fortifications. High sand flats prevented the landing craft from reaching the shore. The men got out in shoulder-deep water and waded ashore, and many died from drowning and from enemy fire.

It became one of the bloodiest beach landings of the war. Omaha, taken by late afternoon, cost about 3,000 casualties of the 43,250 men that carried out the assault. In all, the Allies suffered 4,413 fatalities at Utah and Omaha, 2,499 of whom were Americans.

The sacrifice those men gave proved the tipping point to liberate Europe. Had that operation not occurred, or failed, Europe would have remained in the hands of Nazi Germany and tyranny.

They fought not for their homeland, but for the preservation of the free world itself. That is their legacy.

We remember D-Day not just for the significance of the battle and the liberation of Europe that followed. Even more so, we remember the sacrifice given by the men who died that day, and those willing to do the same today for our country.

It is a spirit embodied by everyone who serves in our military. As Secretary of Defense James Mattis has described it, they have “a willingness to sign a blank check, payable to the American people; a blank check payable with [their] lives, to defend our revolutionary ideas enshrined in our Declaration of Independence and our Constitution, putting freedom above all else.”

It is upon this principle that those men sacrificed their lives and our soldiers today risk theirs.

It is upon this principle that we must fight for the preservation of liberty, be courageous when evil shows its face, and be a beacon of light when darkness approaches.