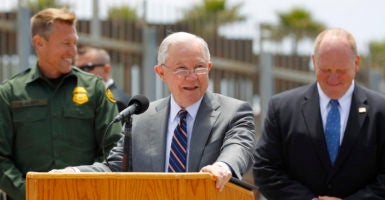 Federal prosecutors accepted 8,298 unlawful entry case referrals from Customs and Border Protection in April, about 30 percent more than the 6,368 they took on in March, according to a report released Monday by Syracuse University’s Transactional Records Access Clearinghouse (TRAC). The prosecution data is based on records of cases referred by CBP, which TRAC receives as a result of its successful open records lawsuit against the government.

Prosecutions of illegal border crossers in April were up even higher when compared to the beginning of the calendar year. There were roughly 60 percent more unlawful entry prosecutions in April than in January, when prosecutors accepted 5,191 such cases from CBP.

The spike in illegal entry cases follows Sessions’ April 6 order to U.S. attorneys in southwest border districts to aggressively prosecute violations of 8 USC 1325, the federal statue covering improper entry by an alien. According to Sessions’ memo, federal prosecutors covering the border areas of Texas, New Mexico, Arizona, and California are to “adopt a policy to prosecute all Department of Homeland Security referrals of section 1325(a) violations, to the extent practicable.”

Sessions modeled his approach on Operation Streamline, a George W. Bush-era initiative that also called for federal criminal charges to be filed against every person who crossed the border illegally. While such prosecutions under President Donald Trump have not reached levels seen under the Bush or Obama administrations, they are likely to climb as Sessions’ order is implemented, according to TRAC.

“Since this is only the first month after Attorney General Sessions’ announcement, prosecution numbers could well continue to build as the policy is more fully implemented,” the TRAC report stated.

Criminal prosecutions for unlawful entry have climbed in tandem with a rise in overall illegal immigration over the past several months. After falling to historic lows in April 2017, border apprehensions have risen in nearly every month since, reaching levels on par with those seen in the latter years of the Obama administration.

Border arrests are used as a proxy for overall levels of illegal immigration. The idea is, assuming a given standard of border security, more apprehensions mean more illegal aliens are slipping undetected into the U.S., and vice versa.

Under pressure to reverse the rising tide of illegal immigration—particularly by unaccompanied children and people traveling in family units—Sessions and Homeland Security Secretary Kirstjen Nielsen announced their departments would separate families caught at the border while the adults are prosecuted in federal criminal court.

The move drew immediate blowback from Democrats and immigration activists, who used images of migrant children in detention centers to paint the Trump administration’s zero tolerance policy as needless and cruel. The Trump administration pushed back, noting that many of the most widely circulated images and reports documenting “rampant abuse” of migrant children in government custody were produced during the Obama years.

Even with the renewed focus unlawful entry cases, TRAC’s preliminary estimates indicate that criminal prosecutions totaled just 22 percent of Border Patrol apprehensions in April. That was up slightly from 20 percent of border apprehensions in January, according to TRAC.