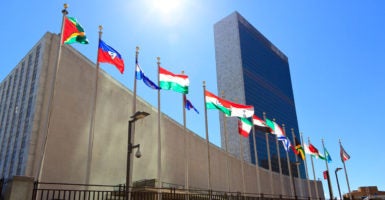 The UN Convention on the Law of the Sea requires that coastal nations pay royalties on their seabed resources to landlocked and developing countries. (Photo: mizoula/Getty Images)

President Donald Trump recently proclaimed June 2018 to be National Ocean Month and stated his support for better utilizing the vast resources contained in America’s Exclusive Economic Zone, the 200-nautical mile zone off U.S. coasts over which the U.S. has jurisdiction.j

Finalized in 1982, the convention codifies long-standing rules of navigation, provides a dispute-settlement mechanism, and regularizes territorial boundaries at sea.

Advocates argue that joining the convention would enhance America’s ability to commercially utilize mineral, oil, and gas resources in the deep seabed and strengthen our ability to protect U.S. interests in the Arctic.

In reality, however, U.S. accession would provide no benefits not already available to the U.S., while creating unnecessary burdens and risks. Heritage Foundation research linked below addresses these points clearly and unequivocally:

>>> Accession to the U.N. Convention on the Law of the Sea Is Unnecessary to Secure U.S. Navigational Rights and Freedoms

>>> The U.S. Can Mine the Deep Seabed Without Joining the U.N. Convention on the Law of the Sea

>>> U.S. Accession to the U.N. Convention on the Law of the Sea is Unnecessary to Develop Oil and Gas Resources

>>> U.N. Convention on the Law of the Sea Erodes U.S. Sovereignty over U.S. Extended Continental Shelf

>>> Accession to U.N. Convention on the Law of the Sea Would Expose the U.S. to Baseless Climate Change Lawsuits

As Sen. Rob Portman, R-Ohio, stated when he joined 33 other senators in opposing ratification of the convention in 2012:

We simply are not persuaded that decisions by the International Seabed Authority and international tribunals empowered by this treaty will be more favorable to U.S. interests than bilateral negotiations, voluntary arbitration, and other traditional means of resolving maritime issues.

No international the seas, and we are confident that our nation will continue to protect its navigational freedom, valid territorial claims, and other maritime rights.

On balance, we believe that the treaty’s litigation exposure and impositions on U.S. sovereignty outweigh its potential benefits.

The 34 senators opposing ratification in 2012 were correct in their assessment of the costs and benefits at the time.

Nothing has changed to lead the U.S. to reconsider accession today. On the contrary, the inability to force Chinese compliance despite a dispute tribunal ruling against Chinese claims in the South China Sea only serves to illustrate that international organizations lack the ability and authority to prevent such aggressive acts.

Between friendly and democratic nations, the convention adds nothing. When a great and autocratic power like China is involved, the convention achieves nothing. To rely on it as a way to restrain a rising China is to make the error of thinking that paper beats scissors.

At the core, the problem with the convention is that it was fundamentally ill-conceived.

The convention contains two boxes: Box A is its provisions on freedom of navigation (which are fine, though not enforceable through the treaty) and Box B is its transfer of billions of dollars of resources to developing and landlocked countries that did absolutely nothing to bring those resources to market.

Much of the point of the convention was to get the developing and landlocked countries to accept Box A by bribing them with Box B.

However, freedom of navigation was already well-established under customary international law before the convention, and thus incumbent on the developing and landlocked nations. It was therefore wrong to bribe them into signing onto it, especially as they benefited from that freedom while doing nothing to enforce it.

Thus, from the U.S. point of view, the convention is a bad deal. Its drafters were deeply imbued with the bad ideas of the 1970s, chief among which was a collectivist, statist approach to development.

Those ideas shaped the convention—and led Ronald Reagan to oppose it before he became president and vote against the convention at the 1982 United Nations Convention on the Law of the Sea and refuse to sign it.

Despite subsequent changes in 1994 that led the Clinton administration to support U.S. accession, the Trump administration should oppose accession to a treaty that offers few benefits and many risks to the U.S.