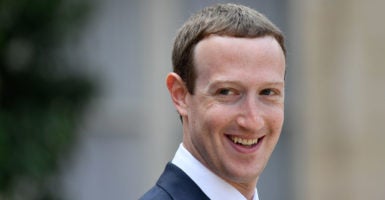 “It’s really important to me and to the company that Facebook and our systems are platforms for all different ideas,” Facebook founder Mark Zuckerberg says. (Photo: Julien Mattia/NurPhoto/Sipa USA/Newscom)

Shareholders peppered Facebook’s top executives during an official gathering Thursday with questions, complaints, and protests after the company’s past year has been littered with scandal and backlash.

Another said the alleged mismanagement of data evoked a human rights violation. One woman was kicked out for constant interruptions in the very beginning of it all. And a plane flew over the premises in Menlo Park, California, dragging the message “You Broke Democracy,” along with an ad from an anti-monopoly activist group, reported Bloomberg.

“A lot has happened since last year when we were here … We didn’t do enough to be proactive about how people can abuse these tools,” Zuckerberg said, adding that the company is doing more to try to protect elections from interference and the social media platform from bots.

“We’re also very focused on being more transparent,” Zuckerberg said, while alluding to the multiple announcements and disclosures the company has made in areas like content moderation.

Zuckerberg was challenged on that exact topic, specifically if there is a bias among leadership or general staff based on ideology and if that affects what content is ultimately allowed on the site used by billions.

“It’s really important to me and to the company that Facebook and our systems are platforms for all different ideas,” Zuckerberg said. “And I noted that there are a number of concerns about that kind of bias. Silicon Valley generally is a very left-leaning place, without knowing or asking specific people at Facebook for their views, I think that’s a reasonable assumption.”

Zuckerberg conceded it’s certainly more likely that many employees within the Silicon Valley headquarters hold liberal viewpoints, but that content moderation is done by people from around the world where there is a more varied outlook on life and politics.

“We have very strict guidelines on how these policies need to be enforced, so if people aren’t doing what the guidelines say, they’re not going to be able continue doing that job,” he continued. “We’re very serious about that.”

Another area of concern broached during the reportedly tense meeting was Facebook’s impact on the local community, a highly strained point of contention in recent weeks as protesters complained the city government cares more about big tech than its own people.

Toward the end of the meeting, according to Bloomberg, after being pressed as to why the company always comes off as defensive, Zuckerberg admitted that while he doesn’t agree with all of the negative news coverage, “some of it is very fair.”